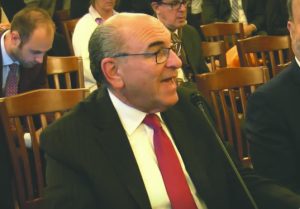 State Rep. Lou Lang (D-Skokie) talks with fellow lawmakers during a state House hearing on sports betting. Lang said lawmakers have many questions to address before allowing sports wagering in the state. (Photos from BlueRoomStream.com)

Illinois has a host of questions to answer long before the first better decides on whether to take the favored Chicago Bears that day or if quarterback Mitch Trubisky’s next pass will land into the hands of an opponent.

As the state continues to inch closer toward legalized sports gambling, lawmakers continue to get input on just what sports wagering could and should look like in Illinois.

State Rep. Lou Lang (D-Skokie) has been one of the leading researchers into the issue — traveling to different states and talking to representatives in those states about perils that come with the profits. He said he does not want to see a rush to judgment from Illinois lawmakers.

“It is important to do this right rather than quick,” Lang said. “Do things too quickly and we will make a mess of this.”

Lang pointed to Pennsylvania as an example of being too quick on the trigger. He noted that Pennsylvania lawmakers passed a sports betting bill that was “untenable to consumers” and has a tax rate “that is far too high.”

The Skokie Democrat told his peers at an Oct. 17 state House Gaming Committee hearing on the issue that the state will need to determine not only how many sports betting licenses are issued, but also what the tax rate on wagered money will be, what types of facilities will be allowed to take sports bets, whether betting will be allowed on mobile devices, whether in-game betting will be allowed, whether any teams will be off limits for wagering such as public universities in the state or minor league baseball, what state agency oversees the betting, and whether any professional sports league will be given an “integrity fee” for the use of its games.

Michael Pollock, managing director of Spectrum Gaming Group, a nonpartisan consultancy that specializes in the economics, regulation and policy of legalized gambling worldwide, said lawmakers will spend more time on one sports betting decision than all the others. 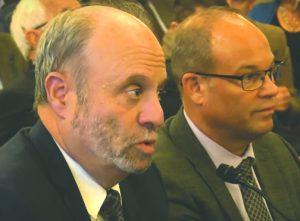 Michael Pollock (left), managing director of Spectrum Gaming Group, a consultancy that oversees gaming regulations and policy, said sports betting working with existing gaming establishments like casinos and racetracks could generate even more money for the state. Next to Pollock is Kevin Mullally, vice president of government relations and general counsel for Gaming Laboratories International.

“The hardest decision you will have to make is who gets the licenses,” Pollock said. “Once you’ve made that decision, it’s done.”

“A gaming license is a privilege, not a right,” Pollock said.

He encouraged lawmakers to view possibilities with the widest possible prism. He said working with existing gambling venues such as casinos and racetracks could increase revenues for the state even further.

Lang said while sports betting would bring new money into state, people should not view it as a cash cow.

He said estimates have put the state’s take in sports betting somewhere between $50 million and $300 million annually.

Because of the federal Wire Act, betting would have to be kept within the confines of Illinois, meaning people in bordering states would be precluded from taking part in Illinois wagering.

Lindsay Slader, vice president of regulatory affairs for Geocomply, a firm that pinpoints bettors’ location for state oversight panels, estimated that 47 percent of Illinois sports betters would be within 10 miles of the state’s borders.