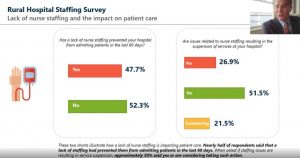 While pandemic funding has provided temporary stabilization to rural hospitals, the emerging nursing shortage continues to worsen, according to Michael Topchik, national leader of The Chartis Center for Rural Health. (Photo by Tammie Sloup of FarmWeek)

A rural health care advisory and analytics provider has found nearly half of rural hospitals have refrained from admissions because of nursing shortages this past year.

Additionally, more than a quarter of rural hospitals have ceased offering some services due to staffing challenges.

“Alarm bells should be ringing on this topic. This is a very big deal,” said Michael Topchik, the national leader of The Chartis Center for Rural Health, during the National Rural Health Association’s Policy Institute on Feb. 8.

The majority of nurses who have left rural hospitals exited for more lucrative positions, while others report being burned out from the pandemic and having to cover as a result of shortages.

Staffing shortages have also impacted services. While some services were suspended by law during the pandemic, Chartis data highlighted trends with obstetric and chemotherapy services, which did not fall under that umbrella. 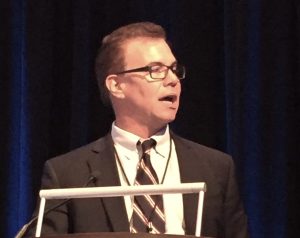 Nearly half of rural hospitals are operating with a negative margin (excluding relief funds), with two rural hospitals closing in 2021, he said. The $12.6 billion in pandemic relief payments has helped, but only temporarily. And Topchik anticipates relative stability through 2022.

Attendees of the policy institute also met with members of Congress — including a handful from Illinois — to discuss emerging issues facing rural communities.

Following his meeting with Illinois rural health representatives, Sen. Dick Durbin, D-Springfield, issued a news release about the discussion in which he highlighted the $1 billion secured in the American Rescue Plan for the National Health Service Corps and Nurse Corps to build a more diverse pipeline of clinicians and recruit more health providers to serve in shortage areas.

To address other rural health care workforce issues, Durbin has introduced the bipartisan Rural America Health Corps Act, which would create a National Health Service Corps pilot program to test whether an expanded loan repayment award and service commitment — $200,000 over five years — would improve retention in rural communities, according to the news release.