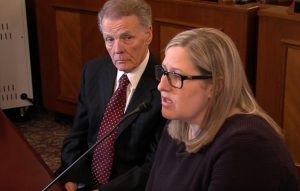 Illinois House Speaker Mike Madigan said that changes would be made to eliminate harassment and abuse in the Democratic Party of Illinois ranks.

His promise was sent to members of the Illinois Democratic Caucus in response to claims that the party was slow to act and worked to cover up the issue when a contract worker came forward with allegations of sexual harassment against a staff member of Madigan’s political campaign organization.

“We haven’t done enough. I take responsibility for that,” Madigan said in a letter last week to caucus members. “I understand the ‘knock it off’ mentality is not enough; and we must, and will, do better moving forward.”

He added a zero-tolerance policy would be in place for his political and campaign arm.

“We cannot tolerate harassment or abuse of any kind,” Madigan said. “Every member, employee, contactor and intern is valued or necessary for the operation of the General Assembly, this caucus, and for the successful election of Democratic candidates in Illinois.”

His comments came after Kevin Quinn, a staffer with the Friends of Michael J. Madigan and brother of Chicago Ald. Marty Quinn (13th), was terminated after alleged sexually harassing text messages to a contract campaign worker, Alaina Hampton, surfaced.

Some have called for Madigan’s resignation in light of the black eye for the Illinois Democratic Party, but the House speaker said he is not going anywhere.

“I don’t plan to step aside,” he said last week.

Heather Wier Vaught, an attorney representing Friends of Michael J. Madigan, said that she has made several recommendations for handling such issues that the House speaker’s political committees would be implementing.

“There will be a clear process of who you can contact if there is a complaint or if you would like to ask a simple question,” Wier Vaught said. “They will have both a man and woman available so people who have questions can be responded to.”

She added that comprehensive sexual harassment policies will be put in place on the party level and every staffer will be required to sign them. There will also be a comprehensive training program for all party staff members, the attorney said.

“And the conversation isn’t over,” Wier Vaught said. “We are looking at best practices from other states. There are just not a lot of other states that have regulations regarding political committees.”

Wier Vaught said it was unfortunate that Hampton did not feel she had an avenue to get her concerns addressed.

Hampton has filed a complaint with the Equal Employment Opportunity Commission, feeling that the investigation, which took three months, was purposely dragged out.

“I am sorry Ms. Hampton felt the investigation took longer than it should have. It did take nearly three months to finish some of the conversations I was having,” Wier Vaught said.  “In these cases, it is important to be fair and balanced. Ms. Hampton had a story to tell, but there were people on the other side who had to be interviewed. Legal analysis had to be done. It was not just a matter of reading the texts and rushing to judgment as to whether or not an act was committed.”