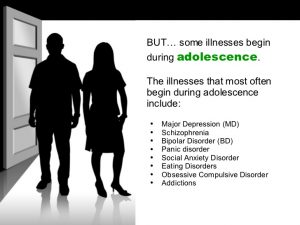 A 7-year-old in Joliet School District 86 is hospitalized because he planned to shoot himself when he went home from school that day.

A student in the Chicago Public Schools loses 50 pounds because he believes if he eats he will kill his mother.

In Elgin Area School District U46, a student, who averages four hospitalizations a year, is suicidal, homicidal, writing things on his arm and has “every diagnosis under the sun,” according to a school counselor, but is still in the general student population because he does not meet criteria for special education services.

These are just a few of the thousands of Illinois students who are hospitalized each year for mental health issues.

In fiscal year 2016, more than 20,000 Illinois youth — many of them elementary and high school students — were treated by a mental health agency, according to the federal Substance Abuse and Mental Health Services Administration. The agency reported that children from birth through age 17 made up 28 percent of the 72,826 people statewide who received treatment in the last fiscal year at a mental health agency.

Due to their overwhelming caseloads, school social workers, in some cases, will not see a student unless the individual is suicidal or an immediate danger to others. Students with mental issues deemed non-life-threatening are often given an appointment weeks away.

“If I could clone myself to make five more of me, I think I could be adequately handling my caseload,” said Katie Smiley, a social worker at Larkin High School in Elgin. “The burden becomes heavier and heavier every day. We need more support. We need help.”

The state is looking at just how to provide that help. The state House’s Mental Health Committee is examining the issue of mental health in schools and gathering information on the problems and potential solutions. Members of the committee are expected to propose legislation addressing some of the issues school districts and their social workers face.

“It’s going to take all of us to work together,” said state Rep. Deb Conroy (D-Villa Park), chairperson of the 21-person Mental Health Committee. “… but we’re going to make some big strides in the right direction.”

Susan Hickey, a retired Chicago Public Schools social worker, noted before a hearing of the Mental Health Committee Oct. 2 that CPS has one social worker for every 1,250 students, five times the recommended ratio put forth by the School Social Work Association of America.

“I still hear from social workers at CPS and they are literally crying their eyes out,” Hickey said. “They can’t handle what they have to deal with.”

Hickey noted that there are more security officers in the Chicago Public Schools than social workers and counselors combined.

“Security officers are not able to handle kids in crisis situations,” Hickey said. “That is not their training.”

Sarah Hartwick, co-director of legislative affairs at the Illinois State Board of Education, admitted that even in the state’s own school-funding formula there is a proposed ratio of 250 students per social worker for middle schools and high schools, and 450:1 for elementary schools. She added that the numbers in the formula are only a recommendation and are not a mandate for school districts.

Susan Scherer, a psychiatrist for children and adolescents, said more needs to be done to improve mental health services for youth.

“In spite of the fact that there is a huge density of the psychiatric profession in the Chicago area, there are not enough psychiatrists serving youth statewide,” Scherer said. “I think that every school should have a social worker, psychologist or psychiatrist, and a school nurse.”

Hartwick said the focus in education is now shifting to the health of the total child.

“With the feds moving away from focusing so much on test scores, states are now given the opportunity to look at children in their entirety and all the resources that are needed to ensure a child graduates from high school ready for college or a career and beyond,” Hartwick said.

She noted that a big part of what the State Board is now focusing on with its efforts is the social and emotional learning of students.