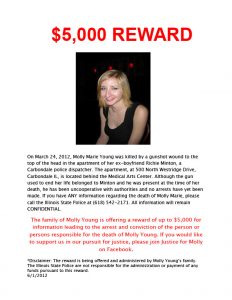 New Illinois laws add more teeth to the state’s Freedom of Information Act and more than double the time to file a wrongful death lawsuit.

The two measures, known collectively as “Molly’s Law,” were sponsored by state Rep. Terri Bryant (R-Murphysboro). She said she pushed them on behalf of the family of Molly Young — residents whose daughter died from a gunshot wound in 2012 in Carbondale.

The Young family went to Bryant after their efforts to obtain police reports about their daughter’s death were stymied to the point their wrongful death lawsuit was tossed out due to the two-year statute of limitations.

Bryant said she felt for the family and wanted to help them, but initially didn’t think she could get lawmakers to change the law.

“I can remember what I felt when Larry (Young) left, just thinking that this was an impossible task before us,” she said.

But, as the governor’s signature proves, it wasn’t impossible.

One measure adds fines of up to $1,000 a day for public bodies that ignore FOIA requests. The other increases the filing period from two years to five for wrongful death lawsuits.

Many members of the Young family were on hand for the signing.

Gov. Bruce Rauner said the changes will help any family in a similar situation dealing with the legal system.

“Molly’s Law is an important protection for families and victims who have suffered from violent action, and who need to bring … closure and justice to that process,” Rauner said. “From a tragedy, hopefully we can bring something good, a better day for the families of Illinois and the future.”

The laws take effect in January.