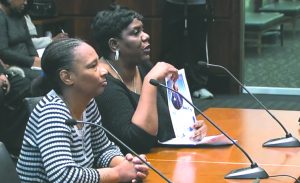 Carmia Tang (right) holds up a flyer with a photo of her slain son as she talks to state senators. Tang’s son was killed in September 2017 and DNA evidence in the case still has not been processed due to an Illinois State Police crime lab backlog. Next to Tang is LaTonya Moore, who said because of the backlog she still doesn’t know how her 27-year-old daughter died in June. (BlueRoomStream.com)

State elected leaders are offering the Illinois State Police close to carte blanche to remedy the crime lab backlog that has some families of murder victims waiting more than a year for answers.

“Request what you need to get this done,” state Sen. Patricia Van Pelt (D-Chicago) told the State Police during a recent hearing.

“When you all come back here in six months, I don’t want to hear y’all say, ‘We don’t have enough money,’” state Sen. Sen. Mattie Hunter (D-Chicago) told State Police officials during a March 25 hearing on the DNA backlog at the state crime lab. “Go ahead and put all the money you need into the budget now and we will work with the governor’s office to make sure you have all the dollars you need, because I don’t want these families to come back here in six months and say ‘We still haven’t gotten anything.’”

Hunter was referring to the families of murder victims in Chicago who appeared before a joint hearing of the state Senate’s Criminal Law and Public Health committees in December saying they were still waiting on analysis of DNA evidence from the 2017 and 2018 murders of loved ones. Some of those same family members were back before the joint Senate panel at the March hearing, upset that they still are still waiting on DNA work to be done in their loved one’s murder case.

LaTonya Moore and Carmia Tang were two of those individuals back before the Senate committees. Tang’s son was murdered in September 2017 and the DNA evidence in the case still has not been processed.

Tang said money is found for special events in Chicago, why not for solving murders.

“A city like Chicago spends millions on parades, Taste of Chicago and Lollapalooza. They’re saying ‘No funds, no help (for DNA processing).’ How did we get this bad?” Tang asked.

Moore, whose 27-year-old daughter was killed in June, said she still hasn’t even found out how her child was murdered.

“I’m just mad with the (Chicago) Police Department because every time I call it’s like ‘I’m gonna call you back’ and he never calls me back or it’s like you call them and they just throw it under the rug,” Moore said. “You’re just like giving up because you already know what they’re going to say.”

Van Pelt said she was surprised that the mothers who were at the December hearing still haven’t gotten answers. She said their wait can’t continue.

“We lost our kids. There’s no way possible we should be going through this,” Moore said. “… West Side and South Side, when it comes to us, we get swept under the rug.”

Illinois State Police deputy director Matthew Davis said he hoped that a serious dent could be made in the backlog in 18 months to two years. He said the backlog is not unique to Illinois and noted it has been referred to in many places “as almost a national crisis.”

“For every case that goes out, approximately 1.2 cases come in,” Davis said.

Van Pelt said despite those numbers, things have to be addressed much more quickly in Illinois.

“Eighteen to 24 months is too long,” Van Pelt said. “It’s way too long because there is fear in the community at this point.”

Robin Woolery, assistant deputy director of the State Police’s Division of Forensic Services, said with the instituting of robotics and other improvements, the crime lab hopes to get to a 30-day backlog by 2021.

“My mother’s heart, as a mother, goes out to them,” Woolery said about the victims’ families. “We have a lot to do. We have a large backlog we need to address and we’re going to do everything we can to meet that.”

Shannon Bennett with the Kenwood-Oakland Community Organization, which has been working with families to bring attention to the DNA backlog, said the families’ stories are heart-wrenching and that they should lead the changes.

“We want to recommend, if the Senate isn’t already thinking about this, that there be a state task force made up of people most impacted by this issue: people at the state level, the governor’s office as well as senators and representatives and also law enforcement,” Bennett said. “As we see, it’s bigger than the Illinois State Police. The State’s Attorney’s Office needs to be involved in this. CPD needs to be involved in this, but it needs to be led by the voices of the victims and the family members. “