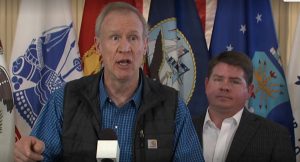 Gov. Bruce Rauner tells of plans to purchase a vacant Sycamore nursing facility as a possible relocation spot for residents of the Illinois Veterans Home in Quincy. Thirteen veterans at the home have died of Legionnaire’s disease since 2015 and four more cases of the disease were diagnosed at the home earlier this month. (Blueroomstream.com)

The state is looking at the option of moving residents of the Illinois Veterans Home in Quincy to a nearby vacant nursing home in an effort to keep them from contracting Legionnaire’s disease.

A request for proposals has also been sent out to developers for possible creation of new facilities on the Quincy campus.

Thirteen veterans at the home have died of Legionnaire’s disease since 2015 and four more cases of the disease were diagnosed at the home earlier this month.

Gov. Bruce Rauner said the state continues to partner with the Centers for Disease Control and Prevention to improve protections at the home and eliminate exposure risks to Legionella.

“We are committed to protecting our heroes and making sure they have a safe place to live,” Rauner said last week in announcing plans for improvements at the Quincy campus. “We have implemented the recommendations the CDC has offered and more. Our teams continue to work with them to identify solutions and put measures in place that keep our veterans healthy.”

The governor said the state intends to purchase the vacant Sycamore Nursing Home, located a few blocks from the Quincy campus and prepare it for occupancy in the event residents need to be moved to protect them from potential Legionella infection. State officials note that there have been no positive water tests for Legionella since completion of the latest remediation.

Rauner said his immediate goal is to protect the residents in place, following expert advice that “transfer trauma” poses serious risks for a fragile population in need of skilled nursing.

“We have to avoid knee-jerk reactions that will cause more harm than good. There are serious dangers associated with moving residents. This is their home. Our staff who care for them are like family,” Rauner said. “Our teams have taken considerable steps to reduce the presence of Legionella at the home. We will continue to do our due diligence. We will continue to be forward-thinking; and we will continue to explore every option to keep our veterans safe.”

Because all 352 Quincy Home veterans could not be housed in the Sycamore nursing facility, modular housing with separate water lines would be provided on the Quincy site should moving them out is agreed upon.

Administration officials had no estimate as to how much a new Quincy facility could cost.

The administration hopes to have a contract in place with a developer for a new Quincy facility by early summer, according to Mike Hoffman, senior adviser to the governor.

He said the state could purchase the Sycamore Nursing Home as a housing option for veterans within the next month or two.

Hoffman said once a developer is in place, different plans will be created for rebuilding the Quincy campus.

“I expect by sometime this fall when we have a plan chosen and we’ll be able to work with the federal government and the General Assembly to get money appropriated,” Hoffman said. “As soon as we have a good dollar figure available, that we can rely on, we’re going to share that, certainly publicly, as well as with our friends in the General Assembly.”

Given all the remediation efforts that have been put in place, Rauner said, the Centers for Disease Control and Prevention has expressed surprise at the persistence of Legionella in Quincy and continues to support the state’s efforts to eliminate risks.

“This is unprecedented,” Rauner said. “This is a very unusual circumstance … That’s why we’re going above and beyond what the CDC has recommended.”