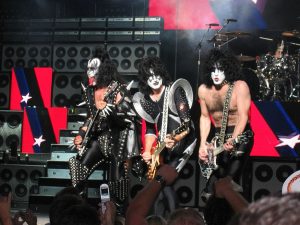 Rockers KISS, pop artist Meghan Trainor, and several different country acts will be included in grandstand shows throughout the fair. (Photo by WOK)

There are new things headed to this year’s Illinois State Fair in Springfield.

Department of Agriculture Director Raymond Poe said one change spurred by state legislation is who can participate in agriculture competitions.

“What that did, it took down the show levels to age 8 so they can start showing, and they can go all the way up to age 21,” he said.

Poe said the goal is to increase participation.

Another change is music entertainment on the first Thursday of the fair, Aug. 11. Fair Director Kevin Gordon said the band Chicago 6, featuring former Chicago Bears players, will perform for free.

“This is a classic rock band that was actually put together in 1987 during the NFL strike, and it consists of Dan Hampton, Steve McMichael and Otis Wilson,” Poe said.

Fair visitors can also expect to find some new food and drink options at the Illinois State Fair in Springfield.

“One that I can’t wait to check out…is deep fried funny bones,” Department of Agriculture Communications Manager Rebecca Clark said. “I don’t know it is but it sounds intriguing enough that I’m going to go buy them.”

Assistant Fair Manager Shawn Mayernick said there’s also going to be a new brew garden with more than 50 brands of beer “and hopefully this will be the inaugural start to something we can grow and help support all of our craft beer brewers around the Illinois area.”

The expo in Springfield opens Thursday evening, Aug. 11 and runs through Sunday Aug. 21.