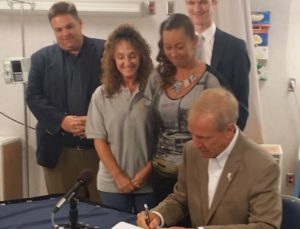 Illinois Gov. Bruce Rauner says a new law will give people who have made mistakes in their past a second chance.

The governor put pen to paper on a law allowing some nonviolent, former felons to get a second chance at careers that require state licensure.

Lisa Creason, who attempted to steal from a Subway back in 1993, wanted to be a nurse. She went to nursing school. But a law passed in 2011, while she was already in school, kept her from getting a license once she graduated.

Creason said she, and a lot of other former felons, aren’t not the same people as they were 20 years ago.

“Ex-offenders are not sub-human,” Creason said. “They’re people who look like me. We’ve tried very hard over the past ten or 20 years to live right. We’ve paid our taxes … we should be afforded the same opportunities as someone else.”

The new law eliminates state mandated, blanket bans on some careers for people with some criminal pasts.

Gov. Rauner said there’s a reason it’s called the justice system, and not the crime and punishment system.

“We need compassion in our criminal justice system,” Rauner said. “We can’t only be about punishment and confinement. We also have to be about rehabilitation.