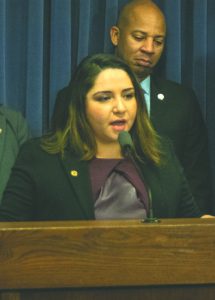 State Rep. Delia Ramirez, a Chicago Democrat, joined colleagues at a news conference Thursday to announce the formation of a new progressive caucus which will push for the legalization of cannabis and campaign finance reforms this legislative session. (Capitol News Illinois photo by Jerry Nowicki)

SPRINGFIELD — A group of House Democrats have formed an official caucus they say will champion a liberal agenda “to provide a better direction” for Illinois.

Among their legislative priorities are increasing the state’s minimum wage to $15 per hour, legalizing recreational marijuana, and campaign finance reform. The minimum wage increase has been approved by the Senate and House and awaits Gov. J.B. Pritzker’s signature.

The Progressive Caucus’ 16 members, most of whom are from Chicago and the suburbs, also plan to consider other initiatives, such as a progressive income tax and expansion of Medicare.

“We are a group of legislators who believe in a progressive vision for our state, one where our government guarantees stability and decency for all Illinoisans,” said Rep. Carol Ammons, caucus co-chair from Urbana.

The group met for several months over the summer to prepare for session, she added, writing bylaws, discussing strategy and crafting a framework of beliefs.

That evolved into the caucus’ Statement of Principles, based on an idea “there is an unjust concentration of power at the very top” of government, said co-chair Will Guzzardi, a representative from Chicago.

“We’re talking about the wealthy and powerful, systemic interests in our state, the very few — the elite — who control a disproportionate amount of both financial resources and power,” he said. “The folks who are connected, who are reaping the benefits from being connected, who are shutting everybody else out of the process.”

There are 118 members of the House, 74 of whom are Democrats. These 16 Progressive Caucus members did not form to harness voting power, said Kerri Milita, assistant professor of politics and government at Illinois State University.

Rather, the formation of a caucus, especially a small one, is often seen as a formal predecessor to major policy change.

“When you have a formal caucus, rather than just an informal group of people, parts of its platform can gain some public traction and if it seems to be really popular with the public, parties will often adopt those as their own,” Milita said. “The power of these smaller caucuses is really more the power to set the agenda rather than to force legislation through.” 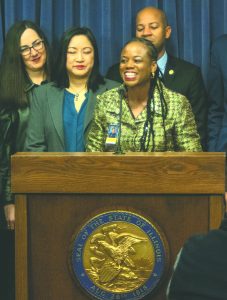 She added that even though the Democratic Party holds a supermajority in both chambers, there is a lot of variation within the policy priorities of its members. This caucus is one way for the more liberal of them to push their agenda.

Guzzardi succeeded on one of the caucus’ goals this session — the House approved a minimum wage hike from $8.25 to $15 per hour Thursday that he sponsored.

At a news event earlier Thursday, Guzzardi said it was a “key priority” for his group.

“We know that $8.25 is not a living wage anywhere in this state — it’s a poverty wage, it’s a wage that keeps families trapped in the cycle of poverty — and that in order to lift families out of poverty and to help grow our state’s economy, we need to raise the minimum wage,” he said.

This is Pritzker’s first major policy push, and he asked lawmakers to approve the measure in time for his budget address Feb. 20.

The governor also indicated his support for legalizing recreational marijuana. Rep. Kelly Cassidy of Chicago, with Sen. Heather Steans, is leading the group’s efforts to accomplish that.

The pair spent about two years working to develop a plan that Cassidy said she hopes will become the national “gold standard.” They are “laser focused” on approaching their legislation with a social justice perspective, she added.

One legislative item the Progressive Caucus is pursuing that Pritzker has not given a position on is campaign finance reform.

Chicago Rep. Theresa Mah outlined the group’s ideas, which have not yet been submitted as legislative proposals this session. A candidate could choose to forego accepting large donations, in favor of small-donor ones that are matched “several times over” by a public fund through state government.

“It’s a way to minimize the outsized voices of big donors and special interests and magnify the political power of everyday people and democratizing political participation,” Mah said at a news event Thursday. 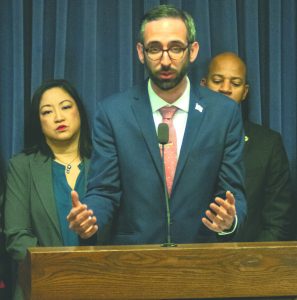 State Rep. Will Guzzardi, a Chicago Democrat and House sponsor of the bill to increase the state’s minimum wage, joined colleagues at a news conference Thursday to announce the formation of a new progressive caucus which will push for the legalization of cannabis and campaign finance reforms this legislative session.  (Capitol News Illinois photo by Jerry Nowicki)

The system is employed successfully in New York City, Mah added, where it diversified both the donor base and City Council.

“We believe one of the biggest obstacles in passing progressive legislation is our broken campaign finance system,” she said. “We have members on both sides of the aisle who are beholden to big money, and big money interests, to their reelection, and too often serving the interests of donors is what keeps people from doing what’s right.”

There are holes in this proposal, though. Illinois owes about $7.3 billion in unpaid bills, among other financial liabilities, so finding a source of revenue for this system could prove difficult. Additionally, a wealthy, self-funded candidate could opt into this program and double-dip.

Ann Lousin, Illinois constitutional scholar and law professor at The John Marshall Law School, said a better system would mimic an old federal program — Illinois should offer a $100 tax credit for donors to political campaigns independent of the size of the donation.

She said the state would lose revenue, but it would be “administratively easy and less susceptible to manipulation.”

Guzzardi said the Progressive Caucus members are looking forward to hearing Pritzker’s budget address next week, and are “seeking progressive sources of revenue to help balance our state’s budget.”