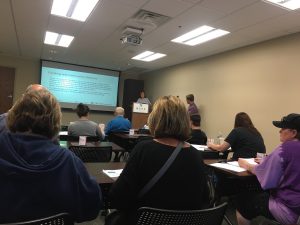 Narcan Trainer Teresa Field (at podium) instructs at a training session at the Winnebago Department of Public Health on Sept. 26. (Photo by Bill Dwyer/for Chronicle Media)

The National Safety Council (NSC) says opioid overdoses are a “national epidemic,“ and that opioid misuse and abuse is now the number one cause of unintentional death in the United States.”

In recent weeks, public health agencies across Northern Illinois have held seminars to educate people on the dangers of opioid overdoses, how to recognize an overdose and what to do in that event.

The Northern Illinois Public Health Consortium (NIPHC) in North Aurora is a point of collaboration and exchange of information for local health departments in the region, including Chicago and nine counties including Cook, DuPage, Grundy, Kane, Kendall, Lake, McHenry, Will, and Winnebago.

“By training residents to recognize the signs of an opioid overdose and administer naloxone, we’re adding more people to combat this deadly public health emergency, help save lives and get those with substance use disorder into treatment,” said Dr. Amaal Tokars, president of NIPHC.

International Overdose Awareness Day was observed on Aug. 31, and numerous educational/training sessions were held throughout September into early October.

On Sept. 26, the Winnebago County Health Department (WCHD) hosted a public educational session in Rockford on the use of the drug Naloxone.

Narcan (marketed under the name Narcan) works by temporarily blocking opioids from binding with receptors in the brain. According to the IDPH, a “statewide standing order allows pharmacists and naloxone training programs in Illinois to provide naloxone without a direct prescription to individuals at risk of an opioid overdose, as well as their family and friends and to others who may assist an individual suffering opioid-related overdose.”

Narcan trainer Teresa Field, from the group Hope Over Addiction, told her Rockford audience that anyone, of any age or social status, if taking opioids for pain or heroin recreationally, is at risk. Among the signs of possible opioid overdose are: pale skin that is clammy to the touch, a limp body, pinpoint pupils, fingernails and/or lips that are blueish, stopped or slowed breathing, slow or stopped heart beat and the person being unable to be wakened. 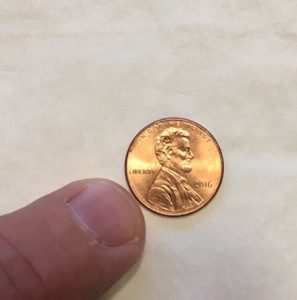 The amount of fentanyl required to cover Lincoln’s nose on a penny is enough to kill a human being. (Photo by Bill Dwyer/for Chronicle Media)

Field said a “sternum rub,” that is, rubbing your knuckles aggressively against the person’s sternum or breastbone — or the space between the lip and the nose — will cause enough pain to awaken a sleeping person.

If the person is not responsive, call 911 immediately, and check their airway for obstructions, and perform CPR, with chest compressions to stimulate the heart to circulate blood.

Then administer a dose of Narcan nasally per the instructions on the box, monitor the person’s breathing, and if they do not respond within two to three minutes, administer a second dose.

“The problem is, you’re scared, and you’re nervous,” she said. But Narcan has no other effect on people other than to block the opioid receptors in the brain.

“The worst that’s going to happen is nothing,” she said. She also noted that under Illinois’ Good Samaritan Act, no person administering a drug like Narcan in good faith that someone has overdosed can be held legally liable for that person

The Narcan dispensing kits distributed at the WCHD seminar contained two doses. Field urged her audience to err on the side of caution and administer both doses of Narcan if there is any chance the person overdosed on opioids, saying, “You don’t know the amount in their system.”

Should a third dose be required, she said, “Hopefully the paramedics will have arrived by then.”

Just how uncertain the potency of drugs an OD victim may have ingested has been an increasing challenge, said WCHD staffer Emily Schmidt. The NIH says fentanyl was a major factor in a 900 percent increase in opioid deaths involving synthetic opioids, from 127 deaths in 2014 to 1,187 deaths in 2017.

Schmidt said that in the recent past authorities have seen instances of the need to use as much as five times the normal dosage of Narcan to counteract the effects of fentanyl overdoses. According to the U.S. Center for Disease Control and Prevention (CDC), fentanyl is 50 to 100 times more potent than morphine.

Schmidt asked her audience to imagine a penny. “Then picture Lincoln’s nose on that penny,” she said. The amount of fentanyl needed to kill an average adult, she said, would just cover the nose on the face on that penny, a much smaller lethal amount than heroin.

Those seeking assistance with dealing with opioid-opioid-related issues are urged to call the Illinois Helpline for Opioids and Other Substances, also known as the Helpline.

It is a free, confidential service offering support, information and referrals to service providers.

Anyone can call 833- 2FINDHELP 24 hours a day, 365 days a year. Specialists include English and Spanish-speaking staff.