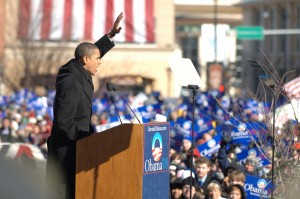 Then U.S. Senator Barack Obama announcing his bid for the presidency in Springfield, Ill. in 2007. (Photo White House.gov)

If there is a bright side to the state budget quagmire, at least Gov. Bruce Rauner and House Speaker Michael Madigan have restrained from calling each other “facetious pettifoggers.”

As the stalemate in Springfield moves into month No. 8, one of the General Assembly’s own came home hoping to help ease the gridlock in the state capital.

President Barack Obama, who had been a state senator from Chicago, addressed the General Assembly on Feb. 10, and said that, sadly, the counterproductive move of name-calling is nothing new to Illinois politics or national politics.

“As I mentioned when I visited a mosque in Maryland … Thomas Jefferson’s opponent tried to stir things up by suggesting he was a Muslim. So I’m in good company,” Obama joked. “But that’s nothing compared to the newspaper which warned that if Jefferson were elected, ‘murder, robbery, rape, adultery, and incest will be openly taught and practiced.’ His vice president, Aaron Burr, literally killed Alexander Hamilton in a duel.

“I don’t even want to tell you what Andrew Jackson’s opponents said about his mama. Lincoln, himself, was routinely called ‘weak, wishy-washy,’ a ‘yahoo,’ ‘an unshapely man,’ ‘the obscene ape of Illinois,’ and, my favorite — a ‘facetious pettifogger.’ I don’t know what that means — but it sounds insulting.”

State Rep. Stephanie Kifowit (D-Oswego) felt that Obama did a great job in delivering a poignant speech, giving an honest look at the divisive politics in Illinois government today.

Kifowit said she knows that a kinder and gentler General Assembly won’t happen overnight, but that when somebody like the president calls for more congenial negotiations in Springfield it can’t hurt.

“Finger-pointing and name-calling is never going to help,” Kifowit said. “We need discussions with open-minded colleagues from opposite sides of the aisle. We need individuals working toward a solution. We need to let someone who just wants to point fingers that that is not constructive at all.”

In an hour-long speech Feb. 10, Obama called for the Illinois General Assembly and general assemblies throughout the country to work together for progress.

“What can we do, all of us, together, to try to make our politics better?” Obama asked. “And I speak to both sides of this. As all of you know, it could be better, and all of you would feel prouder of the work you do it if was better.”

“The president is a skilled public speaker, and … we heard a heartening message about striving for better politics in Illinois,” Sandack said. “I agree with the president in that regard. In this age where the political divide seems insurmountable, we have a responsibility to behave respectfully and with the best interest of our constituents in mind.

“I am ready to do my part, and invite my colleagues from the other side of the aisle to join me for those discussions.”

One item the president touched on that got the attention of state Sen. Jason Barickman (R-Bloomington) was redistricting reform. Barickman agreed when Obama said that politicians should not pick their voters by drawing legislative district boundary lines, but that voters should pick their politicians.

“This shines a brighter spotlight on our quest to finally bring a fair procedure to the process of drawing legislative districts,” Barickman said. “For too long Illinois has been used as an example of some of the worst gerrymandering in the nation; it’s time to finally change the process for the better.”

— Obama on Illinois politics: ‘It could be better’ —