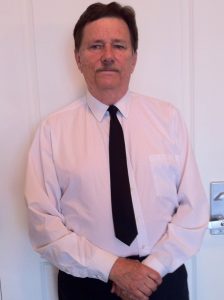 In a little-noticed corner of the Illinois ballot in November, three names will appear in the race for state comptroller’s office. Voters will pick a candidate to serve out the two-year term of the late Judy Baar Topinka, a gregarious Cook County Republican who died of a stroke a month after being elected to her second term in November, 2014.

The name of Green Party candidate and retired labor organizer Tim Curtin, of Westchester, will appear in the comptroller race, alongside Republican Leslie Munger, and Democrat and Chicago City Clerk Susana Mendoza.

Curtin is unlikely to win the seat, but if he gets enough votes, he may be the Illinois Green Party’s secret weapon. If Curtin captures just five percent of the Illinois comptroller vote, that could lead to the Illinois Greens being officially recognized as an Illinois state party in the next election.

“That would establish our party status statewide,” said Green Party State Secretary and Berwyn Committeeman Rita Maniotis. Maniotis served as Curtin’s campaign manager in the 2014 Illinois comptroller race. If that happens, “we could run candidates up and down the ballot in Illinois,” Maniotis said. This year, along with Dr. Jill Stein running for president, Scott Summers is running as the Illinois Green candidate for U.S. Senate and a Vice President candidate is yet to be picked.

Curtin may earn the magic vote totals by harvesting protest votes from left-leaning Democrats who will choose Hillary Clinton and vote for Democratic Senate candidate Tammy Duckworth, but who want to make a statement.

“That’s an interesting calculus, but we think people should vote Green on the entire ballot, no matter what,” Maniotis said.

Things aren’t easy for third parties in Illinois. The Illinois ruling two-party system has rigged ballot access so statewide third-party candidates must get 25,000 notarized signatures compared to only 5,000 for Democrat or Republican candidates.

In the 2014 election, Curtin and other Illinois Green candidates were thrown off the ballot after state Democrats challenged their 25,000 signatures.

“The Illinois Supreme Court still hasn’t decided yet whether I can be on the 2014 ballot,” joked Curtin in an interview.

This election, the Green Party collected 53,000 signatures, with the help of unprecedented numbers of volunteers who came out of the woodwork, Maniotis said.

“I get the calls from people to help every day,” she said. Callers describe themselves as “desperate” and “depressed” about their election-day choices, she said. “They are looking for someone they can vote for. They’re simply not willing to vote for a corporate candidate any more,” she said.

In this unusual election year where mainstream Democrats and the GOP have faced upheaval rejecting the status quo, there’s a renewed interest in Jill Stein, Green Party presidential candidate, and Gary Johnson, who is running for president as a libertarian.

Voters are sick of being asked to hold their nose and vote, Curtin said.

Curtin’s online presence is scant to non-existent. A website hasn’t been updated since 2014 and has very little content. (Curtin says he’s not computer-savvy and the Green Party’s tech people are planning an update in time for the convention in Houston.) As a comptroller candidate, Curtin has no accounting experience — but neither did Topinka.

What Curtin has, according to those who know him, is an ability to bring people together, which is why he was a good union organizer for 37 years, said Carl Rosen a colleague from the United Electrical Radio and Machine Workers of America (UE).

“First of all, Tim requested our endorsement, and since he worked extensively with our locals extensive over the years, we were open to that,” Rosen said. The UE has a longtime policy of supporting “independent political candidates that are not tied into either of the two major parties,” Rosen said.

“He’s a good listener and has wonderful common sense,” said Maniotis. “He’s a big motivator for the West suburban Greens, always encouraging us to get out and get active.

“When he was running for comptroller in 2014 he advocated getting rid of the office,” she added.

Curtin believes Illinois Comptroller’s role should involve more policy. “Leslie Munger announced the state budget was $7 billion in the red,” he said. “She doesn’t say how the state should solve the problem.”

Knowing he us unlikely to win, Curtin said the purpose of the Green platform is to educate voters. Curtin’s central recommendation is adopting the so-called “LaSalle Street” tax, a small transaction tax on derivatives sold in the Chicago Board of Trade and the Chicago Board Options Exchange. The process is a revenue-raiser on Wall Street in New York and in some European stock exchanges, he said.

He likens traders to “speculators and gamblers.”

“The speculators should be paying $10 -$12 billion a year,” he said. He also supports a progressive income tax where “working people pay less and the rich pay more.” Bringing in more tax revenue would allow the state to fund schools more equitably, he said.

About 300 candidates identifying themselves as “Green” have been elected in the US in local elections, Samuels said. The Green influence can be felt in the Democrats’ progressive platform presented at their July convention and in the candidacy of Bernie Sanders for president.

“The Green Party comes up with ideas and the other big parties swoop in and grab them,” Samuels said.

There is a hunger for a third party in the air, said Rita Maniotis, and momentum is building.

Rosen agreed. “As Bernie Sanders said, this is the beginning of a movement that will build long after the election,” he said.

With no corporate contributions and very little money, Greens use t-shirt wearing members at progressive events as “body billboards” to build awareness, Maniotis said. Maniotis said she herself collected 3,700 signatures for Stein and the Green Party slate. “For three months you go nowhere without your clipboard. It was exhausting, but well worth it. I have somebody I can vote for.”

“The message we want to get out there is there is another possibility,” Maniotis said. “We want people to believe there is a way to vote not for their fears, but for their hopes.”

—  Obscure comptroller candidate may pay off for Illinois Green Party  —