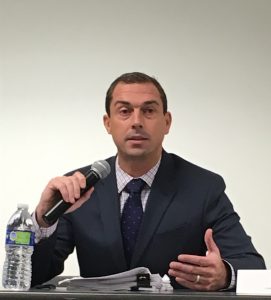 Cook County and Illinois’ other 107 election jurisdictions, assisted by the state and federal governments, are now better prepared to deal with potential cyberattacks.

That was the overall takeaway from an Oct. 16 press conference attended by members of state and local election authorities and the Illinois National Guard.

The Illinois State Board of Elections held the press conference to assure the public that it is doing all it can to protect against another cyberattack like the one that took place in 2016, in which Russian government-sponsored hackers exposed data on 70,000 Illinois voters.

“We’re as prepared as we ought to be right now,” said Illinois State Board of Elections Chairman William J. Cadigan, who noted that local election officials have undergone training to prepare them for the challenges of identifying and dealing with potential cyber hacks.

Cadigan and others touted both the training and partnerships with state and federal agencies that will provide ready expertise in the event of any problems.

County election clerks, their deputies and administrators from around the state underwent “thorough and extensive training” on firewall and email protection in June. Among those training local officials were experts from Harvard University and the Department of Homeland Security.

County clerks around the state appear to be confident as Election Day approaches.

“We are prepared and ready, with the help of many local state and federal agencies, as well as a new partnership (with) the Cybersecurity Unit of the Illinois National Guard and the Illinois State Board of Elections Cyber Navigator program,” said Sally Turner, Logan County Clerk and a former president of the Illinois Association of County Clerks.

Turner also noted that experts from Homeland Security will also be available as needed, saying, “We will be offered immediate service from the National Cyber Situational Awareness Room from the end of October to Nov. 9.”

While all that training and expertise won’t necessarily stop cyberattacks, officials said it will help mitigate any effects from an intrusion.

“The simple fact is, all digital services are vulnerable,” said Noah Praetz, the director of Elections in Suburban Cook County and chair of the Election Center Cybersecurity Committee.

Praetz, who is also co-chair of the Government Coordinating Council, which works the Department of Homeland Security on cyber security issues, said local election jurisdictions in Illinois cannot defend against cyberattacks on their own. He called the state’s response to cyber threats “a coordinated and managed approach to harnessing all resources.”

Praetz said that while modern elections are dependent on the internet, Illinois law also requires that every vote have a paper receipt. That, along with same day registration and provisional ballots, will assure that all votes will be “securely counted.”

“We have a paper artifact or ballot for every single voter. And we do hand counted audits,” Praetz said. “We’re well protected from catastrophic breach and can fulfill our duty. We can still conduct an election that enfranchises all voters.”