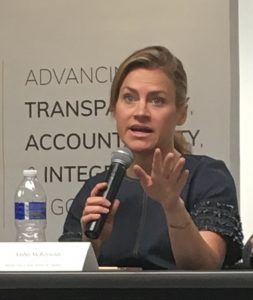 Amber McReynolds, the former director of elections for Denver County, Colo., and a leading expert in innovative voting practices, speaks at a panel hosted by Reform For Illinois Oct. 2. (Photo by Bill Dwyer/ for Chronicle Media)

Can changing how people vote increase the likelihood that more of them will turn out to vote?

That’s the question underlying a panel discussion at the Chicago Board of Elections offices Oct. 2. The panel, organized by Reform For Illinois (formerly the Illinois Campaign for Political Reform) discussed options for modernizing Illinois’ voting process with an eye toward increasing voter turnout.

The short answer, if the state of Colorado’s experience is any indication, is “yes.”

Among the options discussed Oct. 2 were voting by mail, which Illinois already allows, and voting centers that allow any person to vote no matter where they live.

Some on the panel cautioned that adopting new, innovative approaches must not be cause for abandoning practices that benefit certain segments of the populace.

Among the panelists, former Denver County director of elections Amber McReynolds was clearly “first among equals.”

Chicago Board of Elections official Jim Allen called McReynolds, who now heads the National Vote at Home Institute and Coalition, “One of most highly regarded and respected election officials in the United States.” He praised the Denver model she created as being far more inclusive than most election systems.

Over the last 13 years in Denver, McReynolds oversaw such innovative changes as universal vote by mail, monitored ballot drop of centers throughout the county, and same day registration.

McReynolds said that the vast majority of Colorado voters who have opted for mail in ballots preferred “a personal drop-off experience.” Data shows that 80 percent of those requesting mail ballots chose drop-off boxes around Denver, while just 20 percent of ballots were actually mailed in.

Allowing all voters to select the “vote at home” option and mail or drop off, spreads the voting process out over weeks, instead of a single day, greatly easing the strain on election officials.

“If you allow voters to put themselves on a permanent list, local officials don’t have to process those requests every election,” she said. “When you have everything intensely focused on one day, that’s a lot of risk. Eveything has to go perfectly to make that work.

“That is the beauty of this (approach). By spreading it out over time, and getting getting away from the election day sprint, and making it more of an election season, people have more options, and as administrators, we’re mitigating and spreading risk.” 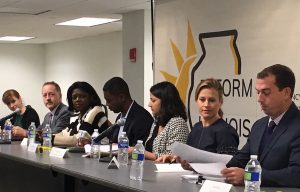 Colorado is constantly updating and assessing voter registration files through data from the Department of Motor Vehicles and the federal postal address change system.

Colorado’s innovations have attracted wide-spread interest. Both Allen and Cook County Director of Elections Noah Praetz have toured the centralized vote counting headquarters in Denver that McReynolds helped design, and both the city and county have been studying the innovations Denver has successfully instituted over the past eight years.

Allen said the idea of voting by mail is clearly catching on with some Chicago voters.

While accepting of voting centers and other innovations in principle, Coleman said such innovations “Should not necessarily eliminate other options.”

“That also impacts impoverished communities without transportation,” Coleman said. African-Americans, who make up about a third of registered voters in Cook County, she said, already feel that their vote does not count.

“They don’t think it matters. They are disenfranchised.”

Gandhi echoed those concerns, saying election officals “need to be clear with the community at-large. If you’re talking about closing polling places, increasing transportation time, get input from community members. We have to have a frank conversation about what reforms we’re considering.”

Praetz said one sure way to increase voter turnout is to have more competitive races on the ballot. And the way to help assure that happens is to make getting on the ballot less daunting a task.

“Competition drives turnout,” Praetz said, noting that it takes 9,000 valid nominating petition signatures to get on the ballot for local office, but only 5,000 valid signatures for the statewide governor’s race.

While state-of-the-art innovations can be good, McReynolds said some old school practices should also be retained.

“Every ballot cast is on a piece of paper,” she noted of the Denver system “(And) every ballot is counted in a central count environment.”

And while the changes Colorado has instituted have been well-received, she stressed that that success evolved over a number of years, and is best not rushed.

Praetz agreed, calling for a “slower, progressing path of incrementalism.”

McReynolds even suggested that modernized, digital voting might one day allow people who’ve already voted to avoid the flood of political ads on their television, saying, “I think … we think there may be the possibility of turning off digitalized campaign ads off TV programming, if you return your ballot.”

Laughter and applause welled up from the audience at that revelation. Said a smiling McReynolds, “This is the way to get people to vote early.”

Reform For Illinois Executive Director Mary Miro said her organization is seeking to continue and expend the conversation on innovations in voting techniques on a community level. Interested parties can contact the RFI at (312) 436-1274, or leave a message on their website, https://www.reformforillinois.org/.