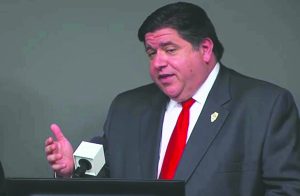 Gov. J.B. Pritzker announces that about 200 members of the Illinois National Guard will assist with flood and levy monitoring along the Illinois and Mississippi rivers. The governor made the announcement during a news conference May 30 in Springfield. (BlueRoomStream.com)

SPRINGFIELD  —  With 34 counties under disaster declarations and more than 2 million sandbags already in use, the governor has deployed 200 Illinois National Guard service members along the Illinois and Mississippi rivers to assist with flood and levy monitoring.

“If there’s a river in Illinois, it’s flooded,” Gov. J.B. Pritzker said during a May 30 news conference in Springfield.

There’s a multi-agency effort underway to address “a grave situation” across the state, he said.

About 200 guardsmen will remain on standby for evacuation missions and continued monitoring over the next few weeks as the weather is expected to become more intense, Pritzker said.

Guardsmen of the 2nd Battalion, 123 Field Artillery Regiment began reporting May 30 to units in Milan, Galesburg and Springfield. They will be ready to deploy to flooded areas Friday.

Pritzker urged everyone who lives along the river to prepare for the worst and put in place a family evacuation plan, especially those living in Calhoun, Jersey, Green, Scott, Morgan and Cass counties.

“The time to prepare is right now,” Pritzker said.

Omer Osman, acting secretary of Illinois Department of Transportation, said road closure updates are available on IDOT’s web page, and he urged caution for anyone planning to use the roads. If driving cannot be avoided, he urged people to plan ahead, keep phones charged and avoid flooded areas.

“This is a grave situation, and this administration is using every tool at our disposal to keep people safe,” Pritzker said.

Alicia Tate-Nadeau, acting director of Illinois Emergency Management Agency, said flooding in the state has been ongoing for about 80 days and is expected to reach “historic highs.”

“This is one of the longest floods we’ve ever had going all the way back to 1927,” Tate said.

Though no major critical infrastructure has been damaged and evacuations have yet to occur, the situation in Calhoun County is critical, Tate said.

Flooding has been detrimental to farmers, said John Sullivan, director of Illinois Department of Agriculture.

Crop planting has reached historic lows with just 35% of corn crops and 14% of soybeans planted this season, Sullivan said.

“I’ve been farming and been involved in agriculture my entire life and I’ve never seen, never seen, a situation like we are in right now,” Sullivan said.

Shelters have been identified and can be found at ready.illinois.gov.