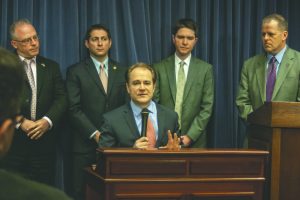 State Sen. Dan McConchie (R-Hawthorn Woods) is joined by fellow Senate Republicans at a Tuesday news conference at the Illinois State Capitol in Springfield. McConchie introduced a constitutional amendment proposal which would require a two-thirds vote from the Legislature to approve any new tax proposals or increases. (Capitol News Illinois photo by Jerry Nowicki)

SPRINGFIELD — As the Democratic-controlled state Legislature mulls a constitutional amendment to change the state’s income tax structure, Republicans in the Illinois Senate are touting a plan to require a two-thirds vote to propose or raise any new taxes in the state.

Per state Sen. Dan McConchie’s plan, any proposal to raise taxes would require a greater supermajority — two-thirds of legislators — than the three-fifths needed to put a constitutional amendment question on the ballot. McConchie said the two-thirds threshold is the same to expel a member or convict on impeachment.

“We are tying it to the exact same standards that are in place in California and Wisconsin,” he said, adding that 14 states require some type of supermajority vote on taxes.

McConchie, a Hawthorn Woods Republican, introduced Senate Joint Resolution Constitutional Amendment 12 at a Capitol news conference with fellow Republicans which lasted about six minutes Tuesday. He called the effort one to “protect middle-class residents by giving them a voice in safeguarding their hard-earned money.”

McConchie said the amendment would apply to any tax proposal, income or otherwise.

McConchie said Gov. J.B. Pritzker’s proposed graduated tax structure “got the attention” of Republicans in the Senate, helping to spur the proposal. The Senate Republican caucus released a statement earlier this month which said they would oppose Pritzker’s tax structure “without guaranteed protections for middle-class families.”

Illinois’ Constitution mandates a flat income tax structure, and the Legislature needs only a simple majority vote to raise the rate, which is currently 4.95 percent.

“What I am simply saying is that taxpayers deserve a seat at the table when it comes to negotiating tax increases,” McConchie said.

While McConchie’s bill was just filed Tuesday and he said some moderate Democrats had shown interest, it appears unlikely to muster the 36 votes needed for passage in the Senate, which has 40 Democrats and 19 Republicans.

“Republicans in Springfield are so desperate to keep our current unfair tax system that they are resorting to political stunts in an attempt to ensure a system that disproportionately places the burden on middle- and lower-class families stays in place,” Think Big Executive Director Quentin Fulks, a former Pritzker campaign staffer, said in a statement.