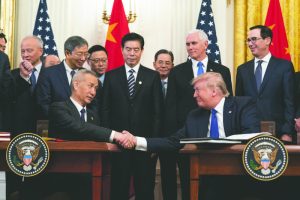 : President Donald Trump and Chinese Vice Premier Liu He signed the phase one China-U.S. trade agreement last week. The pact, while encouraging to U.S. and Illinois farmers, came under criticism from Illinois soybean producers who noted that Chinese tariffs on U.S. soybeans had not been removed as part of the agreement. (White House photo)

While we were still reeling from the news of Illinois Agriculture Director John Sullivan’s sudden resignation, a lot happened in the world of agriculture last week. For instance: President Donald J. Trump managed to begin to repair the damages caused to farmers by his trade war against China with the announcement of the beginning of “phase one” restoration of trade relations with the top importer of Illinois soybeans. In addition, the Senate signed the U.S.-Mexico-Canada trade agreement. While all this was happening, Illinois rivers began to creep over their banks again … please read on for all the high and low-lights …

SPRINGFIELD — The shock waves are still settling from last week’s stunning announcement that Illinois Agriculture Director John Sullivan would step down (see the full feature article in this week’s Chronicle for details). During Sullivan’s year as Illinois Department of Agriculture chief, he guided the department through the challenging internal transitions associated with both the legalization of hemp as a cash crop, and of course, recreational marijuana — all while dealing with an explosion in dicamba misuse complaints, prolonged weather-related calamities, a trade war affecting the state’s number one export, soybeans, and … have I missed anything, farmers?

“The accomplishments over the last year are many and I know we will continue the mission of the department,” said Jeremy Flynn, Sullivan’s ex-chief of staff, in an all-staff IDOA email announcing he would be serving as Illinois’ acting ag director.

Sullivan’s departure came four years and four months after the resignation of then-IDOA Director Philip Nelson, who abruptly quit his post due to reported friction between he and former Governor Bruce Rauner, in September 2015. Like Sullivan, Nelson was a farmer with deep ties to the Illinois agricultural community.

BLOOMINGTON — The U.S. and China reached what the United States Department of Agriculture called a “historic and enforceable” agreement on a “phase one” trade deal with China that requires the communist nation to implement structural reforms and other changes to its economic and trade regime in the areas of intellectual property, technology transfer, agriculture and more.

Included is an agreement from China to annually purchase an average of at least $40 billion of U.S. food, agricultural products and seafood over the next two years.

“This agreement finally levels the playing field for U.S. agriculture and will be a bonanza for America’s farmers, ranchers and producers,” announced USDA Secretary Sonny Perdue on Wednesday, Jan. 15.

The American Farm Bureau Federation pointed out that the new agreement calling for $40 billion in Chinese purchases per year blows away the prior record U.S. agricultural export to China of $26 billion in 2012.

“Illinois farmers are ready to regain our trading position with China,” said Guebert Jr. “We are well-positioned to fulfill China’s demand of soybeans, pork and additional commodities, and this agreement provides a pathway for the next generation of Illinois young farmers.”

However, the announced agreement did not go far enough to satisfy Illinois soybean producers such as Doug Schroeder, a Mahomet producer who is president of the Illinois Soybean Growers. Though the pact is a “sign of brighter days to come,” according to Schroeder, “we hope that more details emerge on the status of China’s current tariff on U.S. soybeans, which were not included in today’s trade deal. A long-awaited win for the soybean industry will come when the soybean tariffs are fully rescinded, and we are anxiously awaiting that announcement.”

BLOOMINGTON — Proving that bipartisanship can be achieved in the Senate, Illinois Democratic Senators Dick Durbin and Tammy Duckworth voted in favor of moving forward with the United States-Mexico-Canada trade agreement. The pact was approved by a Senate vote of 89-10, and now awaits the signature of President Trump — which could occur before press time for this newspaper.

Following the January 16 Senate vote, Illinois Corn Growers Association President Bill Leigh, a farmer from Minonk, made the following statement: “Every step towards USMCA passage is a cause for celebration. Trade with Mexico and Canada is a vital part of the market for Illinois corn, with both countries making up 25-30 percent of corn sales leaving the country.

“ICGA would like to thank our Senators, Tammy Duckworth and Richard Durbin, for the vote in support of the agreement as well as the entire United States Senate for their bipartisan and overwhelming support.”

‘How high is the water, mama’

SPRINGFIELD — The old Johnny Cash tune, “How High is the Water, Mama” has been spinning around in my head for several weeks now. With the Illinois River and other rivers in the state of Illinois again spilling over their banks, and in at least one case, breaching a levee, many farmers are starting to worry that planting conditions won’t be much of an improvement — if any at all — over last year’s disastrous spring. Other folks are worried about property damage.

The National Weather Service predicts abnormally moist ground conditions and unseasonably higher river levels this spring, meaning the time to prepare for spring flooding is now. To that end, the Illinois Emergency Management Agency, Illinois Dept. of Insurance and Illinois Department of Natural Resources have been engaged in a “FloodPrep” tour to help prepare communities and families to better combat spring flooding and secure flood insurance, which state officials are encouraging before another flood occurs.

A FloodPrep meeting was held Jan. 15 in Murphysboro, with others planned for Jan. 22 in Alton (4-6:30 p.m. at the National Great Rivers Museum) and Jan. 29 at Black Hawk College in Moline (4-6:30 p.m. in the Sustainable Tech Building). More events could be announced in the near future; we will post dates and locations when they are released.

Projections for Chinese soybean imports in 2019-20 are at 3.12 billion bushels, up 73 million bushels over the previous marketing year estimate. (USDA)