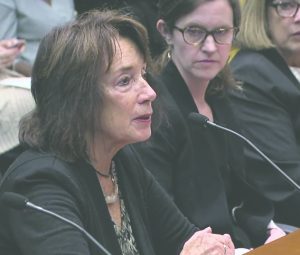 Stacie Geller, a professor of obstetrics and gynecology at the University of Illinois at Chicago, tells a state House committee that the underlying cause in the disparity of care between pregnant

Litesa Wallace says it was only throughout the grace of God that she delivered a healthy baby boy 15 years ago.

Despite working out twice a day, having a master’s degree, and knowing her body better than anyone, she said, as a black woman, her concerns 12 weeks into pregnancy were never taken seriously.

“I was stating that things didn’t feel right. I felt lots of pressure. I felt heavy. I didn’t even look like I was pregnant, but I felt like I was,” the state representative from Rockford said. “The dull pain in my back. The idea that maybe I’m just gaining weight too fast. I was completely just dismissed when I presented concrete symptoms.”

Wallace went into pre-term labor at 28 weeks because of toxic and environmental stress, and she successfully delivered her baby eight weeks later, but she wonders why lawmakers may have to find a way to mandate that doctors listen to their patients.

Stacie Geller, a professor of obstetrics and gynecology at the University of Illinois at Chicago, has been studying, researching and sitting on committees about women’s mortality in child birth for 30 years.

“Clearly, I am not very good at my job because things are not getting better,” Geller said. “They seem to be getting worse.”

Statistics show that mortality rates for black women during childbirth are bad nationally. In Illinois, they are even worse.

Geller said the underlying cause in the disparity of care between black and white women comes down to one thing: racism.

“Until we really address that, I feel I could do this another 30 years and still be at this table,” she told a state House panel examining the issue at an Oct. 30 hearing. 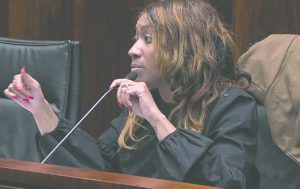 State Rep. Litesa Wallace (D-Rockford) said she went into pre-term labor while carrying her son 15 years ago. She said her concerns during pregnancy were not taken seriously because she is a black woman. (BlueRoomStream.com)

“Racism is the number one problem,” Flowers said. “As long as we have this inferior health care and supposedly superior for others, we’re going to continue to see this, and it has to stop.”

She said black women feel stress long before they enter a doctor’s office for pregnancy care.

Stripping away racism in care is easier said than done, according to experts.

“How do we address the fact that when a black woman versus a white woman complains of symptoms she’s taken less seriously? I don’t know how to fix that,” Geller said.

The UIC professor said that women at higher risk of death and health issues during pregnancy don’t get the specialized attention they need because physicians don’t ask the vital questions that could signal high-risk factors.

When queried, the physicians say, “I don’t know where to send her so why should I ask?” according to Geller. “That’s one real problem in Illinois.” 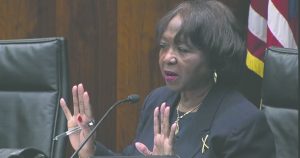 State Rep. Mary Flowers (D-Chicago) said that the major reason for more black women dying during child birth than white women is a disparity in health care between the races. (BlueRoomStream.com)

She said more programs and social workers who spell out high-risk factors can help women get the specialized help they need. Geller said that expanding Medicaid in the state to provide a year of postpartum care for mothers, instead of just six weeks, would go a long way to reducing mortality rates.

Flowers questioned what it will take to turn the health care system around in Illinois.

“Why do we have this inferior health care? Why? I don’t understand it,” she said. “We’re all equal. It’s not just black women that’s dying. There’s something that’s wrong.”

She questioned whether it will take a legal case like Brown vs. the Topeka (KS) Board of Education, which guaranteed equal education for all, to get equal health care treatment.