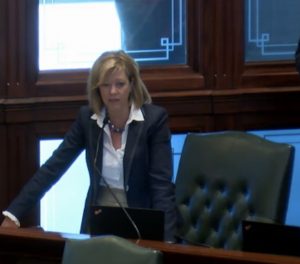 State Rep. Jeanne Ives (R-Wheaton) said that children chronically absent from taxpayer-funding early childhood education programs should not be allowed to enroll in the program the following year. (Blueroomstream.com)

“What we find are the patterns of truancy and absenteeism start as early as 3, 4 and 5,” said state Rep. Linda Chapa Lavia (D-Aurora), sponsor of the legislation. “Throughout the state, we need to start focusing and retraining our brains to understand that early childhood is just as important as primary and secondary ed; and it gives the pattern and the relationship, not only with the parent, but the child, understanding that school is important.

“As they matriculate into the next level of education, if they miss more than 10 days, the chance of them going on to the next grade is like 57 percent. So this is a really important step, to start collecting data to see the habits of our early childhood programs throughout the state, if they receive state funding.”

If passed by the Senate, the bill would require that as of July 1, early childhood programs would begin collecting data on chronic absences. Beginning in July 2019, programs would also have to determine what support and resources are needed to positively engage chronically absent students and their families.

Public early childhood programs would then be required to provide annual reports to the State Board of Education on absenteeism data as of July 2020.

Chapa Lavia said that once the data begins to be collected, she foresees other legislation addressing chronic absenteeism in the youngest of students.

“We will see where the data takes us as a state,” the Aurora representative said.

“This is a bill basically saying, ‘By the way, if you don’t show up to class, we want to know about it in a written report,’” Ives said during House discussion of the bill Thursday. “Well, how about this? If you don’t show up to class, you no longer get to put your 3-, 4- or 5-year-old into taxpayer-funded child care and early education. How about that as the accountability measure? How about you lose your spot? Because we know there are more children who want and need early childhood education.”

She said people who don’t have their children showing up to their public early childhood education program should not be allowed to enroll them the following year.

“Then people will show up, if you really want them educated,” Ives said. 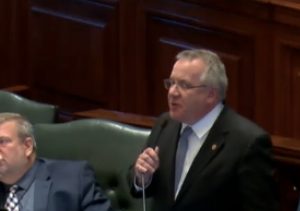 State Rep. Steven Andersson (R-Geneva) said he had not planned to speak on the bill, but became incensed with Ives’ comments.

“The idea that we would throw our children out of preschool because they didn’t show up enough, that’ll teach ’em, huh?” Andersson asked. “That’s the answer? Can I tell you, it’s not just about a low-income area. It’s about my area, too; affluent areas. You know why kids sometime become chronically absentee? Because they have mental health issues … . To suggest that because they have been absent too much we ought to kick them out? That’s a great recipe for disaster. You’re abandoning our children when you do that. You’re not helping them.”

State Rep. Litesa Wallace (D-Rockford) said it is difficult for parents without adequate resources to get their children to the early childhood centers, in some cases.

She said the benefits of early childhood programs are evident.

She said lawmakers need to talk about the expensive nature of early childhood education.

“Seventeen thousand dollars as the incremental cost for early childhood education? You might as well put them in ISU for that cost.”

Representative Chapa Lavia angrily replied, “The funny thing is, Representative, they don’t get to ISU without early childhood (education).

She claimed that Ives’ numbers were off-base and that the state pays about $4,000 per child for early childhood education.

Representatives of the Illinois State Board of Education were unable, as of press time, to provide figure for how much the state spends per child for early childhood education.