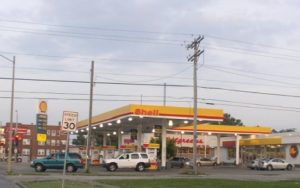 A Shell/Jiffi Stop location in Springfield. Jiffi Stop eliminated 130 of the reported 950 jobs cuts in Illinois in July.

The largest announced layoffs for July come from the National Opinion Research Center, or NORC, in Chicago. The market research firm slated more than 280 layoffs as part of a restructuring, expected to begin in September.

NORC spokesman Ron Jurek said the organization is growing, just not in Illinois.

“We do data collection that spans multiple time zones; and to set us up to provide the coverage that our clients need, we took the hub and spoke model approach,” he said.

Jurek said Illinois’ business climate had nothing to do with the move.

NORC announced in July that it was opening a new survey research center in Wichita, where it would be recruiting 300 interviewers. Jurek said four staff from Chicago will be headed to Kansas.

Despite the announced remote call center in Kansas and another in New Mexico, Jurek said NORC will remain in Chicago.

“The 285 folks are the folks that actually are affected,” he said. “We’ll have about 160 folks remain in Chicago; and of the 285 folks, the vast majority are part-time, intermittent employees.”

Among other expected layoffs reported in July are 130 jobs at several western Illinois Jiffi Stop locations because of a change in ownership. Will County automotive parts manufacturer Bergstrom will see 50 layoffs because of a relocation.

July’s reported 950 layoffs was more than June’s report of 592 layoffs, but less than May’s report of nearly 1,300 layoffs.

State law requires businesses to report mass layoffs. The state then makes resources available for workers to find retraining and placement into other jobs.