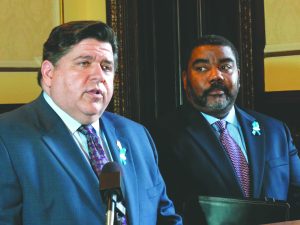 With Acting Director Marc Smith looking on, Gov. J.B. Pritzker talks about addressing the recommendations in a study for reforming the state’s Department of Children and Family Services. During a news conference Wednesday at the Capitol in Springfield, Pritzker said he will carry out all recommendations, which include working with courts and prosecutors to refine the criteria used for removing children from their homes, refining protocols for closing Intact Family Services cases, and improving the quality of supervision within the agency to provide more clear lines of authority and supervision. (Capitol News Illinois Photo by Peter Hancock/Capitol News Illinois)

SPRINGFIELD — Democratic Gov. J.B. Pritzker vowed Wednesday, May 15 to carry out all of the recommendations in a new, independent report that calls for sweeping reforms at the Illinois Department of Children and Family Services to prevent future deaths of children who have been in foster care or other child welfare programs.

The report by Chapin Hall, a child and family welfare policy research institute at the University of Chicago, focused on what are known as “Intact Family Services,” which are intended to address cases of child abuse or neglect without removing those children from their homes.

In most cases, those services are provided by outside agencies that contract with DCFS, although the agency does keep direct control of certain “high-risk” cases. Over the past several months, there have been a number of high-profile deaths of children whose families had previously received those services.

The report cited a number of “systemic influences” within DCFS that have prevented the agency from operating those programs effectively. Those include “structural” issues in the way in which teams and individuals are organized and held accountable; “procedural” issues involving how cases are managed and how work flows in business processes; and “cultural” issues involving commonly held beliefs among people who work in the system.

“These challenges are the result of many years of misguided decisions, underdeveloped program rollouts and unacceptable funding cuts,” Pritzker said at a Statehouse news conference. “There is nowhere in the Illinois government that has been more hollowed out than DCFS. And there is nowhere in state government where those cuts have done more damage.”

In his budget proposal, Pritzker has asked lawmakers for an additional $75 million for DCFS and authority to hire an additional 126 case workers.

But the report calls for additional reforms within the agency, such as working with courts and prosecutors to refine the criteria used for removing children from their homes, refining protocols for closing Intact Family Services cases, and improving the quality of supervision within the agency to provide more clear lines of authority and supervision.

“The recommendations provided by Chapin Hall amount to an overhaul of Intact Family Services,” Pritzker said. “I am committed to carrying out that overhaul as quickly and effectively as possible.”

Standing with DCFS Acting Director Marc Smith, Pritzker said the agency has already taken some steps, including launching a high-level review of more than 1,100 open cases, establishing an eight-person “crisis intervention team” that will conduct immediate investigations and reviews in cases of child deaths, and expanding training programs for caseworkers.

One thing the report did not call for, and which Pritzker so far has not recommended, is to abandon the privatized system of contracting with outside agencies to provide Intact Family Services and to bring those services back in-house where they would be performed by state employees.

Anders Lindall, public affairs director for AFSCME Council 31, the union that represents DCFS workers, said in an email statement that doing away with privatization should be considered.

“The report talks at length about systematic improvements to DCFS and child welfare generally, including making the department more accountable,” he said. “One way to ensure that DCFS is directly accountable in high-risk cases is keep all of them in-house on state employee caseloads rather than outsourcing these cases to private contractors with fewer resources and less oversight.”