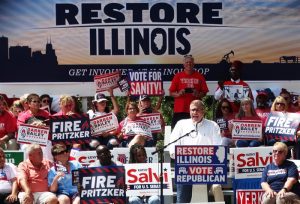 SPRINGFIELD – Illinois Republicans gathered for their annual day at the State Fair on Thursday, Aug. 18 to showcase their candidates in the Nov. 8 election, vowing that the party will “restore Illinois.”

But as the party faithful celebrated amid the sunshine, barbeque sandwiches, corn dogs and other fair staples, questions lingered about how unified the party will be in supporting its ticket given that many candidates have shied away from endorsing the party’s gubernatorial nominee, state Sen. Darren Bailey, a southern Illinois farmer who has stirred controversy with his unguarded statements about abortion, the pandemic, Chicago and other issues.

“I may be a little bit rough around the edges, but I will work for you because I’m just like you,” Bailey said to an enthusiastic crowd. “And friends, I promise you this — no one will work harder for you.”

During one candidate forum in the primary campaign, Bailey referred to the state’s largest city as a “crime-ridden, corrupt, dysfunctional hellhole,” reiterating that he believes Chicago has become a hellhole in his fair speech Aug. 18.

In recent days he’s also come under fire for old social media posts, including one in which he compared abortion in the United States to the Holocaust.

“I support the ticket, and we’ve got a great ticket. I’m supporting them and I’ve said that already after the (primary) election, so I will be campaigning with every Republican who’s on the ballot between now and Election Day,” House Minority Leader Jim Durkin, of Western Springs, told reporters at an event earlier in the day.

Durkin also said he is focused on trying to gain seats in the Illinois House, where Republicans are outnumbered by Democrats, 45-73. But he touted the fact that this year, the party has candidates in 106 of the 118 House districts, a record for the GOP.

The rally also featured candidates for other statewide offices, including secretary of state, where state Rep. Dan Brady, of Bloomington, hopes to establish a GOP foothold by focusing exclusively on the duties of that office.

The rhetoric at the GOP rally was in stark contrast to that used by Democrats the day before, when Pritzker referred to Republicans as “the lunatic fringe.” Republicans fired back on Aug. 18 by casting the Pritzker administration and Democrats in the Statehouse as extreme leftists and accusing Pritzker of having higher ambitions.

“I have traveled all around our state to help our fellow Republicans rescue Illinois from the leftist Gov. Pritzker,” Tracy said. “He now wants to run for president. Are you kidding me? What a disaster he’s been for Illinois. Gov. Pritzker has done nothing to address public corruption, crime, the rising cost of gas and groceries.”