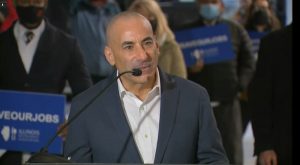 Sam Toia, president and CEO of the Illinois Restaurant Association, urges Gov. J.B. Pritzker to come up with alternatives to closing bars and restaurants to indoor service during a news conference Friday, Oct. 30 in Chicago. (Blueroomstream.com)

SPRINGFIELD – Illinois restaurant owners are asking Gov. J.B. Pritzker to rethink the state’s efforts to control the spread of COVID-19 as yet another medical region was placed under enhanced mitigation measures on Friday, Oct. 30.

“We want to collaborate with the state of Illinois on a different path, one that addresses the alarming surges we are seeing while protecting the livelihood of industry workers and restaurant owners-operators across Illinois,” Sam Toia, president and CEO of the Illinois Restaurant Association, said during a news conference in Chicago.

Toia said he and other industry officials hope to meet with Pritzker next week to discuss alternative mitigation measures. In the meantime, he said, the restaurant association is teaming up with the National Restaurant Law Center in Washington, D.C., to file amicus briefs in several pending lawsuits challenging the administration’s executive orders.

“These are prudent actions we can take now to support favorable rulings in lawsuits that are underway,” Toia said. “There will be more. It is important for the courts to hear about our rights and how we’ve been harmed as an industry.”

Pritzker, however, gave no indication Friday that he was willing to back away from his mitigation strategy.

“Every day, we now see these numbers going through the roof,” he said during his daily COVID-19 briefing in Chicago. “And so the idea that we’re going to make the locations that are amplifying the number of cases and the spread, the transmission of this virus, that we’re going to open those even more at this point makes no sense.”

The news conference came on the same day the Illinois Department of Public Health announced that Region 6 in east-central Illinois would be placed under enhanced mitigation measures, including the closing of bars and restaurants to indoor service, effective Monday, Nov. 2.

That leaves Region 2 in west-central Illinois, including Peoria and several surrounding counties, as the only one of the state’s 11 regions not currently under enhanced mitigations.

Those measures are triggered whenever a region crosses one of the state’s benchmarks that measure a dangerous surge in COVID-19 cases. The most common reason has been recording three consecutive days of an average test positivity rate above 8 percent.

But even Region 2 is expected to fall into that category early next week. As of Wednesday, Oct. 28, the most recent data available, its positivity rate stood at 8.5 percent and had been rising for six of the previous 10 days.

Restaurant owners across the state have been leveling objections to the mitigation orders for weeks, arguing that there is scant evidence that the recent surge in outbreaks can be traced back to their establishments. They argue that theirs is one of the most heavily regulated industries in the U. S., undergoing frequent health and safety inspections, and that most restaurants have been diligent about cleaning, sanitizing and requiring patrons to wear face coverings.

“We all agree that private uncontrolled gatherings are a leading cause of the rise in cases,” Toia said. “Closing restaurants for indoor service will cause the exact opposite of the intended impact of slowing the spread as it drives people further into uncontrolled, unmonitored private gatherings where few safety precautions are in place. By closing our restaurants, people are going to have house parties and it’s just going to drive COVID-19 up.”

“The fact that bars and restaurants are more dangerous places for spread, they’re really amplification points for people who are sick who go into a bar or restaurant,” he said. “It’s very easily spread in that environment as many, many studies have shown… We’re talking about a (U.S. Centers for Disease Control and Prevention) study, we’re talking about studies that have been published in the Journal of the American Medical Association, in The Lancet, many international journals.”

At that time, based on the number of daily new cases and the rate of viral spread, it appeared that the COVID-19 pandemic was tapering off in Illinois. But since late August, cases have begun surging again and regions across the state have been placed back under resurgence mitigation measures.

“Fifty-five percent of Illinois operators say it’s unlikely their restaurants will be open if the current conditions are still in place in the next six months,” Toia said. “The most conservative estimates say that a minimum of 20 percent of our restaurants will close down here in the state of Illinois. That means we will lose over 120,000 jobs.”

Pritzker, meanwhile, said he sympathizes with the restaurant industry, but he insisted the measures he is taking are the best way to control the spread of the disease.

“All I can say is that I am going to fight this virus,” he said. “We have got to get these numbers down, and do you know why? So we can reopen the bars and restaurants.”

Most of the state under renewed COVID-19 mitigations