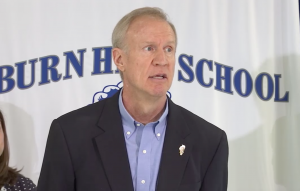 Whether Illinois schools will receive state funds to open in the fall will depend on a compromise between two parties that have historically not been very good at working together: The General Assembly and Gov. Bruce Rauner.

“To a certain extent it’s a game of chicken as far as who’s going to essentially blink,” said Springfield expert Ken Redfield, a professor emeritus of political science at the University of Illinois at Springfield. “Politically both sides are playing regional politics.”

At issue is SB1, the funding formula reform bill built on “evidence-based” funding for K-12 school districts. The bill was passed in May by the House and Senate, but, as of press time, had not yet made the final journey to the governor’s desk. Rauner threatened July 20 to convene a special session to hammer out education funding.

“[Democrats] have executed a parliamentary maneuver,” Redfield said. “The bill is in a last stage, where if someone files a motion to reconsider, that freezes things.”

Rauner demanded the bill be on his desk by July 24. He said he planned to enact an amendatory veto, stripping out $215 million in pension help for Chicago Public Schools, which he’s referred to as a “bailout.” The Governor also wants to zero-out the CPS “block grant” that would distribute another $200 million to downstate and suburban school districts.

But the governor is running out of time for the vetoed bill to return to the General Assembly and be voted up or down with the line-items removed.

“The legislators have been sitting on it, hoping to build pressure to get the governor to agree to negotiate,” Redfield observed.

Springfield’s atomic bomb is the prospect of school districts not opening their doors in August. The first General State Aid payment is due to school districts Aug. 10. School districts want the Legislature and the governor to act by the end of the month to ensure all schools are able to open and stay opened.

“I’m determined to get our kids back to school on time. It’s my number-one priority,” Rauner said in a statement July 20. “That’s why I again insist that lawmakers send me Senate Bill 1 so I can take immediate action. The bill is being held hostage by Democrats in the Senate. They’ve been holding this bill for six weeks now. It’s shameful. Stop putting politics and pensions before our kids. We don’t have any more time to waste. Send me SB 1 now.”

Chicago Public Schools Supt. Forrest Claypool has already stated that CPS will be in session on the first day of school, but to do that, in July alone CPS had to borrow $775 million at high interest rates. Claypool warned that other districts were on the brink.

“There are hundreds of school districts throughout the state that are in deficit-spending who are hanging by a thread and probably not able to open school in the fall but for a state education budget,” Claypool said at a May speech at the Chicago City Club. The clocks are ticking and districts are stretched thin.

“Nobody wants to go back to their constituents and explain how come kids aren’t in school,” Redfield said.

However, the governor also has a parliamentary strategy he can wage, and that is to pressure House Republicans, Redfield pointed out.

If Rauner passes the bill, with an amendment stripping out CPS funding, the Senate Democrats could easily override it. But House Republicans, who already stuck their necks out when they voted to override Rauner’s budget vetoes will hold SB1 in their power, Redfield said. Fifteen GOP House members voted with Democrats during the process to approve the state budget and raise state income taxes. If they choose not to override Rauner’s SB1 amendatory veto, the entire bill dies and there will be no funding plan for K-12 schools. That might make it hard for some districts to start classes on time.

Meanwhile school districts are watching from the sidelines.

“We can open or doors, but [without General State Aid] we have enough money to get through November or December,” said Sharon Kherat, superintendent of Peoria Public Schools D150. “We’re urging all parties to return to the table for negotiation.” Kherat said she believes the funding model in SB1 is sound, based on 27 research-based factors. Peoria SD150 is among the 10 districts statewide that would gain the most funding under the formula. The district would gain $138 per student, or $1.8 million.

“It needs to be kept pure, without adding pension reform or property taxes to the conversation. All these frustrations are self-inflicted,” she said.

“Our fund balances have diminished to dangerous levels,” said Darren J. Root, superintendent of Auburn SD10 in Auburn on July21. Root has written that many schools south of I-80 are severely under-funded and experiencing financial difficulties. Auburn would receive $420,493 under the proposed funding formula. “We rely on the professionals in Springfield to make solid decisions so this adult problem is no longer a kid problem,” Root said.

If schools are delayed in opening, Redfield said the GOP and Democrats would be pointing fingers at each other.

“Both sides have people they don’t want to be on the wrong side of this issue next November,” Redfield said. “It’s complicated and very high stakes, as if we didn’t have enough drama in this state.”