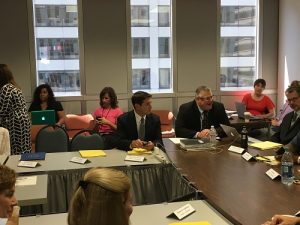 The lawmakers tasked with fixing how Illinois distributes funds to its public schools want to keep a laser-like focus, but that means a lot of other school funding issues are being left to linger for now.

Illinois’ school funding task force, which met for the first time last week, is only looking at how the state pays for schools — not how much it needs.

The commission will not consider other school funding issues such as property tax relief, pension costs and collective bargaining reforms, although those are important issues that the state will have to address, according to state Rep. Avery Bourne (R-Litchfield).

“We have working groups in the state, right now, that are working on (other) reforms and issues,” Bourne said. “This one is centrally focused on the school funding formula.”

“What this (commission) has the potential to do, as you increase the scope of it, is to spiral out of control to a point when you can’t get anything done,” Barickman said.

Barickman added it’s going to be tough enough to agree to a new way to distribute nearly $7 billion to schools. Other issues — including where to get those funds — have to be left alone for now.