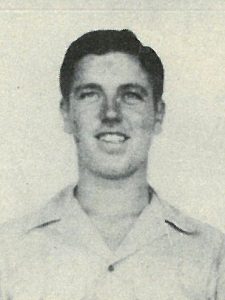 Corporal Francis Callaghan, a long way from his home on the South Side of Chicago, was a determined man on the morning of February 4, 1945. Callaghan was a member of the 530th Engineer Company, which had fought its way down the length of Luzon Island in the Philippines and was just completing a bridging operation across the Pasig River in the heart of Manila.

Callaghan had other things on his mind, however. He was determined to find his aunt and uncle, Sam and Cecilia Ladic, and their three young daughters who were imprisoned somewhere in a cluster of prison camps north of the Pasig River.

Before the war, Sam Ladic had managed a gold mine in northern Luzon, but the family was captured by the Japanese in December 1941 as they marched down Luzon Island toward the Bataan peninsula and Manila. Since their capture, the entire Ladic family had lived a nightmare existence.

Now three years later, the reports were that the Ladics, together with hundreds of civilian prisoners as well 300 survivors of the Bataan Death March, were imprisoned in the notorious Bilibid prison, just two miles north of where Callaghan’s unit was bridging the Pasig River.

That bridge gave the Americans access into the heart of Manila’s governmental sector, where a Japanese garrison was ready to defend the city to the last man. Once the bridge was completed, Callaghan pestered his commander for permission to search for his relatives.

“He gave me permission after a while,” recalled Francis during an oral history interview over 70 years later, “and then he said, I think you’re crazy. There’s still fighting going on!”

He left anyway, working his way north through the deserted streets of the city, past dead bodies and the debris of battle, along streets still infested with Japanese snipers.

There were no signs of Japanese guards when Callaghan reached Bilibid Prison. They had fled when an American armored unit moved through the area. There was also no sign of American troops, who had bypassed the prison in pursuit of the Japanese. 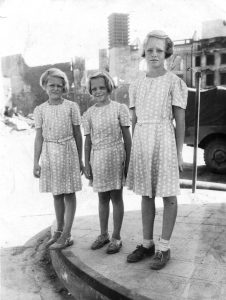 The oldest of the Ladic girls, 12-year-old Mary Ann (Koucky), and her little sisters.

What Callaghan saw first at Bilibid were the Bataan Death March survivors in an enclosure built more like a lion’s cage than a prison cell. They were little more than skin and bones. “They reached through the wire fence and wanted to shake my hand, and wanted cigarettes and candy,” said Francis. When he asked about Sam and his family, someone pointed him in the right direction. Francis soon found his uncle.

“I said ‘Francis Callaghan from Chicago,’” he wrote in a letter to his mother later that month.  “Boy, he just hugged me all over. Who was behind him but his three daughters dressed in bright yellow dress(es) and beautiful blonde hair.”

The oldest of the Ladic girls, 12-year-old Mary Ann (Koucky), still remembers the horrors of Bilibid Prison, the awful stench of the makeshift graveyard where the Bataan boys who died were hastily buried, and the gnawing hunger that was her constant companion. She especially remembers the camp’s liberation.

“Oh, it was exciting!” she said in her 2016 oral history interview. “We heard the rumble of tanks coming.” Then one of the prisoners called out, “Those are tanks coming. They’re Americans!”

Even though the tankers did not stop at the prison, the next morning the Japanese guards were gone. That’s when Francis arrived at the camp and found Sam and the girls. Cecilia, Mary Ann’s mother, was in an adjacent camp, near death from a severe case of amebic dysentery. The Americans’ timely arrival saved her life.

After returning from the war, Francis went on to run a successful brick and stone contracting business in the Chicago area. Mary Ann came of age in Taylorville, attended Loyola University for a couple of years, then left to get married in 1954. Seventeen years and nine children later she finally earned her college degree from Millikin University, then went on to a rewarding career as a teacher, administrator, and eventually a financial consultant.

Some 70 years later, a unique bond unites Francis with his cousin Mary Ann. Although he now lives in La Grange and Mary Ann lives in Decatur, they still keep in touch.

Mark DePue is the Director of Oral History at the Abraham Lincoln Presidential Library. You can listen to both Francis Callaghan’s and Mary Ann Koucky’s version of their amazing story at the program’s web site at www.oralhistory.illinois.gov.

— Search for missing relatives amid  WW II combat in the Philippines —