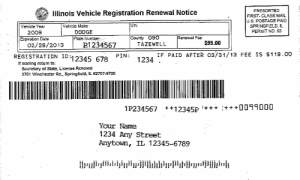 The Illinois Secretary of State office is reinstating the renewal notices, but will also seek authorization from the General Assembly to include paid advertisements.

The Secretary of State’s office is looking for authorization to sell advertising on paper license plate renewal notices as a way to offset the cost for reinstating the paper notices.

Notice mailings are a courtesy, but were suspended in October 2015 because the state didn’t have a budget. That saved taxpayers $450,000 a month. In that time Secretary of State Press Secretary Dave Druker said a large number of drivers were getting punished for not having the up-to-date plates.

Druker said the office is reinstating the renewal notices, but will also seek authorization from the General Assembly to include paid advertisements.

“So that will be something that we’ll submit in the veto session come November and if we don’t have success in that short period of time, because quite often they don’t deal with new issues, we’d be looking at doing it in the spring session of the General Assembly to give us authority to seek advertising to offset the costs that are entailed,” Druker said.

Druker said the office is reinstating the notices because people were getting punished for not having up-to-date plates.

“Whether it was getting tickets in their local community or having to pay that $20 late fee if you’re more than a month late, we are trying to reach out to that group,” he said.

Since October Druker said more than 800,000 Illinois motorists have signed up for electronic renewal notices.

“So if we can continue on that path hopefully we can get it down to a very small figure in terms of mailing and ultimately to the point where maybe we wouldn’t have to do it.”

In total, Druker said more than 2.3 million Illinois motorists are registered to receive electronic reminders which removes them from the paper reminder list.