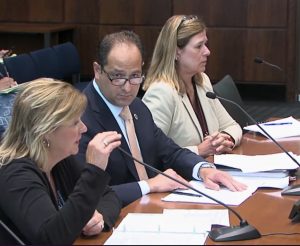 Liz Gorman (left), executive director of the Illinois Toll Highway Authority, tells state senators about a potential conflict of interest that was self-reported in her agency. With Gorman are John Donato, chief of procurement for the Toll Authority, and Jan Morrow, the state’s deputy chief procurement officer. (Blueroomstream.com)

A law aimed at combating cronyism in state contracts is keeping minority- and woman-owned companies from getting state work, according to one lawmaker.

State Sen. Martin Sandoval (D-Chicago) said that after the reign of convicted Gov. Rod Blagojevich, rules were put in place requiring that any meetings between state procurement officers and potential vendors regarding professional services be reported. Because of that requirement, Sandoval said, procurements officers don’t meet with anybody, hurting the chances of less-established and upstart companies to gain state business.

“In our rush to cleanse state government from what was going on in the Blagojevich era … this new level of compliance review was implemented,” Sandoval said during a July 24 state Senate Transportation Committee hearing on Illinois Toll Highway Authority contracts. “It has had the unintended consequence to not allow for even greater transparency, greater competition and greater inclusion of our firms, to the extent now that professional firms — attorneys, engineers, marketing people, IT folks — they’re selected based on their professional experiences and expertise as well as cost.”

The Chicago state senator said that the state bureaucracy, such as the reporting of meetings with potential vendors, has swayed officials from considering new service providers and opting, instead, to stick with firms that already have a track record with the state.

“What does that say for all the small, new, minority (and) women-owned upstart companies, mid(-sized) firms that want to participate in state government? They’re shut out. We, in essence, in our rush to cleanse our procurement process, have, in essence, shut everyone out.”

Sandoval said having more firms getting state contracts would trigger more competitive pricing, lower costs and savings to the taxpayers.

Because of the extra layer of procurement, state government tends to stick with a network of proven entities, Sandoval said. He said minority- and women-owned businesses have a very hard time getting an appointment to meet with state procurement officers about potential projects. 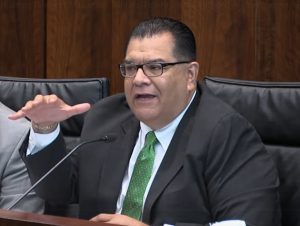 “So state government has a tendency to be only selective of the current folks that have generally been doing business with state government,” the state senator said. “Therefore, it’s not as efficient as we thought it would be “

Sandoval said no one has been willing to touch the procurement legislation passed from the Blagojevich era because “there is no political will to be perceived as wanting to undo reform.”

Regarding the Toll Authority, senators wanted to be certain that chief tollway engineer Paul Kovacs had no involvement in a contact going to a company where his son works at as a civil engineer.

“The conflict was self-identified as a potential conflict of interest,” Liz Gorman, executive director of the Toll Highway Authority, said. “(Paul Kovacs) was recused of any kind of involvement.”

Senators also questioned why if the Toll Authority has an 11-person communications staff, with a $1.6 million budget, it spends millions of dollars on communication subcontractors for various projects.

Morreale Communications, which is owned by the wife of state Rep. Michael McAuliffe (R-Chicago), was hired through WSP, an engineering firm working on the Interstate 294 tollway expansion project, Gorman said.

“We have no communications contracts. They all fall under the prime contract,” Gorman said.

“Having 11 people in our communications department when you have hundreds of homeowners to reach out to and explain our plans to is too much for the tollway,” Donato said. “That is why it is part of the larger projects and the engineering projects.

State Sen. Cristina Castro (D-Elgin) noted that Morreale does more for the Toll Authority than just public outreach. She noted the communications firm’s work includes writing speeches for the board chairman and board executives, preparing talking points and briefings for senior staff and board members, securing media spots on the radio, monitoring community meetings, copy editing, graphics support and providing a new mission statement for the agency’s diversity department.