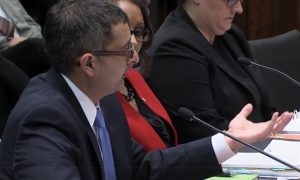 Some state senators have called for the resignation of the director of the Illinois Department of Public Health over ongoing cases of Legionnaire’s disease at the Quincy Veterans Home.

Four new cases of Legionnaire’s disease have been diagnosed at the Veterans Home since early March. Thirteen people at the home have died and dozens more were infected as a result of the outbreak which has lasted for three years.

State Sen. Sam McCann (R-Plainview) is one of the lawmakers who has called for IDPH Director Nirav Shah to resign for being slow to react when the first cases of Legionnaire’s disease were confirmed at the Quincy site in 2015.

At a state Senate and House joint Veterans Affairs Committee hearing on the Quincy Veterans Home last week, McCann ripped Shah saying that as the state’s chief public health officer he has failed.

The Plainview senator said that many employees at the home only found out there was a health issue when media reports surfaced about the outbreak.

“There was at least a six-day delay on that. Can you imagine if we weren’t running this facility? McCann asked. “If this were a private company running this facility and their chief public health officer waited a week to disclose it and they disclosed it through the press, (the Occupational Safety and Health Administration) would be setting up a full-time camp at that facility.”

He said for three years, people have been living at the facility and running the risk of contracting a deadly disease.

“Isn’t it ironic that we have people living in that facility who survived the battlefield, but may not survive us?” the state senator asked. “Three years. This is unacceptable.”

McCann said he was happy the Department of Veterans Affairs said at the hearing that it would, by month’s end, have a plan for alleviating the Legionella issues at the Quincy Veterans Home.

“While that is encouraging, it does not pardon the failure of leadership that I believe emanated from the Illinois Department of Public Health,” McCann said in a statement following the hearing.

During the hearing, the Plainview senator said that he has no confidence in Shah and called for his resignation.

“If you won’t provide it, I call on the governor to relieve you of your duties,” McCann said. 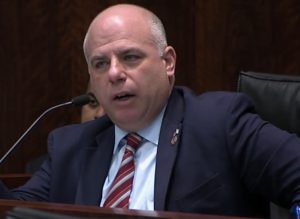 State Sen. Sam McCann (R-Planview) says it is unacceptable that issues with Legionnaire’s disease have plagued the Quincy Veterans Home for three years. “We have people living at that facility who survived the battlefield but may not survive us,” McCann said. (Blueroomstream.com)

Shah said that response steps were started within a half-hour of the second Legionnaire’s disease diagnosis at the Quincy home in 2015.

State Sen. Cristina Castro (D-Elgin) said responses from Shah and Erica Jeffries, director of the Department of Veteran Affairs, have been unacceptable in the wake of a deadly outbreak.

“This crisis has lasted three years and claimed 13 lives,” said Castro. “I don’t feel like there is a sense of urgency to get this done. It’s taken us three years to get here and still the problem has not been solved.”

The CDC has pointed to the aging plumbing in the century-old buildings at the Quincy home as harboring the bacteria that causes the disease.

Instead of replacing the piping in all the residences, Jeffries said her department would rather demolish old buildings and construct new ones. That, however, will take time to accomplish, she noted.

Castro has been outspoken in her criticism of how the administration of Gov. Bruce Rauner has handled the situation, pointing to emails in which Shah and others appear more concerned with controlling media coverage than controlling what Rauner has called a public health “crisis.”

“It took three reports and a lot of covering their tails, but still nothing has been done,” Castro said, agreeing with McCann that Shah should resign.

Castro balked at the Rauner administration hiring outside engineers twice in the past three years to study how to address problems at the home but that no action was taken.

State Sen. Tom Cullerton (D-Villa Park), chairman of the Senate’s Veterans Affairs Committee, said he is frustrated with Rauner’s actions in ridding the Veterans Home at Quincy of Legionella bacteria.

He said the administration has flip-flopped on its original proposal of refitting the Quincy buildings’ pipes to now wanting to construct new buildings.

“We are going on three years of inaction and lack of leadership from Governor Rauner’s administration. It is clear he has no intention to rid the Quincy Veterans Home of Legionnaire’s disease,” Cullerton said. “At this point, his photo ops and press conferences provide nothing but lip service to our nation’s heroes while we wait on a real plan to guarantee our veterans receive the care and service they deserve.”

Cullerton said the governor’s administration has created two task forces to examine the issue, but each only meets for an hour each month.

“Three years later, all the governor has to show for his efforts to combat an outbreak that caused 13 deaths are two engineering reports, two monthly task force meetings, dramatically misquoted figures and no real solution,” Cullerton said. “That is a long laundry list of nothing.”