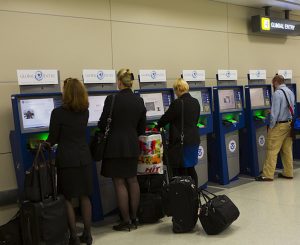 With Global Entry you don’t have to fill out that blue Immigration form on the plane, and you don’t have to wait in line. Just stop by one of the Global Entry kiosks, scan your passport, place your fingers on the finger print scanner, let the camera scan your face to identify you biometrically and answer several customs questions. (U.S. Customs and Border Protection Agency photo)

For many air travelers in Chicago and around the country last spring, passing through airport security was a jaw-clenching nightmare.

As travelers at Chicago’s O’Hare and Midway airports endured waits as long as two hours, their anger and frustration triggered media coverage, industry reaction and action by the federal government.

The situation stemmed in part from understaffing in the Transportation Security Administration. But it also stemmed from an underwhelming response by air travelers to a 2013 program designed to expedite airport security screenings.

“We have never seen TSA wait times that affect airlines and passengers throughout the United States like we have seen in recent months,” Kerry Philipovitch testified before a House subcommittee on transportation security.

American Airlines subsequently announced it was putting $4 million into adding personnel to help expedite the passage of its customers through the ticketing and security process.

Around that time the TSA’s head of security, Kelly Hoggan was forced to resign after a U.S. House Committee hearing. In July Peter Neffenger was named the new TSA administrator.

Homeland Security Secretary Jeh Johnson told NBC’s Andrea Mitchell that using TSA’s PreCheck results in an average wait time of only 5 minutes. Besides a separate line, PreCheck flyers do not have to take off their shoes, belts or jackets,

TSA had projected the rise in air traffic passengers in 2016 would be offset by more people opting for Precheck and Global Entry, also known as “Trusted Traveler” or “Known Traveler” status. But applications for both PreCheck, which expedites passage through boarding security, and Global Entry, which expedites passage through immigration and customs, have lagged.

The situation improved over the summer. On Sept. 7, Secretary Johnson and the TSA’s Neffenger held a press conference at Ronald Reagan Washington National Airport to announce that the TSA hired more than 700 new Transportation Security Officers (TSOs) and shifted more than 2,700 TSOs from part-time to full-time.

That all resulted in significant improvements to the airport security experience, with 92 percent of air travelers waiting less than 15 minutes over the summer.

Avoiding the lines departing and arriving 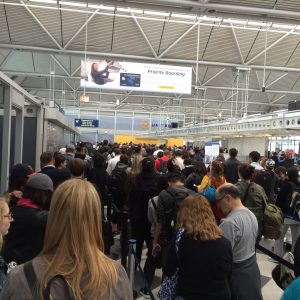 As travelers at Chicago’s O’Hare and Midway airports endured waits as long as two hours, their anger and frustration triggered media coverage, industry reaction and action by the federal government. (Photo by John Blais/Chronicle Media)

I’ve been stuck in a few crawling security lines. But after enduring an over 90-minute wait crawling through the immigration and customs process in Miami returning from Central America in the spring of 2014, followed months later by an hour-plus wait upon returning from Great Britain, I’d had enough.

In October, 2015, three months before leaving the States again, I applied for the federal Global Entry program, also known as GOES.

I recommend it to anyone who travels even once a year.

Besides enjoying expedited pre-flight screening (When you’re approved for Global Entry, you’re automatically eligible for PreCheck) I breezed through the Customs and Immigration process after return flights this year from Central America and Europe.

The application costs $100 and is non-refundable in the event you are not approved for Global Entry. So if you have some mark against you, assume Homeland Security is aware of it, and don’t waste your money.

By the way, check with your credit card company. Many will reimburse the $100 fee, as mine did.

Prior to the-in person interview and processing, applicants have to complete a detailed on-line form asking for personal, work and other history.

You need to be very careful to avoid entry mistakes. In particular, your full legal name must be entered exactly as it appears on your passport. Any discrepancy will cause your application to be denied at least temporarily.

Your application will be used in a rigorous background check.

Within a week or two, you’ll receive an email giving you an application ID and what’s known as a PASS ID, or Trusted Traveler membership number.

The office is located on the lower level of Terminal 5, at the end of the airport’s tram system.

The interview was done by a friendly and professional agent who took a biometric photo of my face and finger printed all 10 of my digits.

The GOES ID is enclosed in a small metallic envelope that protects the information in it from being “electronically pick pocketed.”

TSA was warning about months-long waits this past summer.  However, I traveled twice to the O’Hare Homeland Security offices the past year, first for myself, taking rapid transit, then with my girlfriend by car. Both went smoothly and quickly.

Once you’ve been accepted for Global Entry, you’ll need to register your Trusted Traveler number (the airlines call it “Known Traveler number”) in order to receive TSA PreCheck status. You can enter the nine-digit number while making ticket reservations, or enter it into your airline frequent flyer profile.

The kiosk will print out a transaction receipt that you then hand to the Immigration officer at the end of the expedited GOES line, and you’re done. 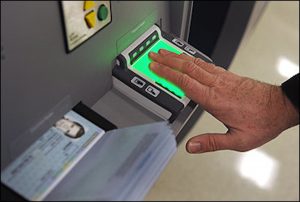 With Global Entry you don’t have to fill out that blue Immigration form on the plane, and you don’t have to wait in line. Just stop by one of the Global Entry kiosks, scan your passport, place your fingers on the finger print scanner, let the camera scan your face to identify you biometrically and answer several customs questions. (U.S. Customs and Border Protection Agency photo)

But the challenges will continue going forward, as the number of travelers moving through the nation’s airport security lines annually reach new record levels.

“Our goal is to get to half of passengers having some kind of PreCheck capability within the next two years,” said Napolitano.

The TSA went as far as to introduce “Managed Inclusion 2,” which randomly assigned ticketed flyers PreCheck status on their boarding pass, regardless of whether they had applied or not.

But that program was discontinued after a person assessed to be a threat by federal authorities was assigned PreCheck status.

Now TSA is working to encourage air travelers to opt in to PreCheck and Global Entry of their own volition. That appears to be working, but not nearly as quickly as official would like.

The Global Business Travel Association reported that TSA official John Sammon told their annual Legislative Forum in May that TSA PreCheck’s goal is to have 25 million enrolled by 2019.

The current enrollment, Sammon said, is just over 7 million.