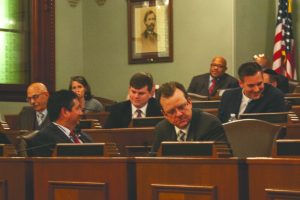 State Rep. Larry Walsh (foreground), an Elwood Democrat, is pictured in the House Energy and Environment Committee meeting Tuesday in Springfield. Walsh is the sponsor of a bill that would reform the state’s energy capacity procurement procedures in northern Illinois. (Capitol News Illinois photo by Jerry Nowicki)

SPRINGFIELD — The state’s various energy industries all had their say at a pair of House committee hearings Tuesday in which three widely discussed energy bills advanced with their sponsors promising further negotiations.

By the end of the spring legislative session, all three bills — Democratic Joliet Rep. Larry Walsh’s capacity market reform and a pair of carbon-cutting, clean energy job-creating bills carried by Chicago Reps. Ann Williams (HB 3624) and Will Davis (HB 2966) — could all be part of an omnibus energy reform package.

Central to the discussion is the existing Future Energy Jobs Act, which expanded the state’s carbon-cutting efforts in 2016.

Williams and Davis want to increase private investment in that act, which they say will lead to further cutting of carbon emissions and creation of clean energy jobs through various methods. Walsh’s bill would put the authority for procuring clean energy capacity for northern Illinois in the hands of the state, rather than federal markets.

Nuclear energy provider Exelon told the House Public Utilities Committee that if the clean energy progress resulting from FEJA is to continue, its industry will have to play an essential role. For that to be possible, Senior Exelon Vice President Kathleen Barron said, the Legislature will have to approve some version of Walsh’s House Bill 2861, the Clean Energy Progress Act, by the end of the session.

Barron said this bill would empower the Illinois Commerce Commission and the Illinois Power Agency to take over responsibility for procuring clean energy generation capacity in northern Illinois — a process currently controlled by the multi-state regional grid operator PJM.

This is necessary, she said, because recent changes to federal rules are pushing clean energy out of the market.

When a provider buys capacity from a grid, it is not buying electricity, but the guarantee that the market can meet consumers’ demand for electricity any given time.

The PJM market holds auctions for energy capacity three years out, so Barron said if action on the bill is not taken this spring session, it could delay the process by two years, until 2024, causing delays to carbon reduction in Illinois.

The Citizens Utility Board testified in favor of switching authority for capacity procurement to the ICC and IPA.

“As Exelon’s proposal shows, by putting Illinois in charge of its own clean energy policy, we have an opportunity to guarantee savings for consumers while greatly expanding renewable energy investment in the state,” the CUB said in a March 14 news release.

Barron said Exelon’s bill would contain protections against price gouging, locking in a lower rate in the first year of the program and allowing it to grow at only the rate of inflation.

But representatives of the fossil fuel industry called the measure a bailout for Exelon, and a nuclear energy watchdog group took exception to Exelon’s classification of itself as a “clean energy” provider.

Judith Lagano, senior vice president of NRG Energy, Inc., a natural gas provider, said her industry plays a “critical role in keeping the lights on,” and walking away from the PJM market would be walking away from lower energy costs. She was joined by about 35 NRG employees at the committee hearing.

David Kraft, director of the Nuclear Energy Information Service, an anti-nuclear power environmental organization, said the bill “disguises another bailout” for uneconomic nuclear reactors in “the language of a pseudo-market based capacity market reform.”

“The only way it seems we can move renewable energy forward and energy efficiency in the state is through a nuclear hostage crisis — in other words, renewables don’t move unless Exelon gets something for its nukes,” he said.

Kraft warned of the dangers of nuclear waste and said if Exelon’s financially troubled reactors closed, it would be beneficial for Illinois’ environment not to have several extra thousands of tons of nuclear waste housed in the state.

While Kraft said he believed the energy reforms didn’t go far enough, Republicans and fossil fuel representatives warned that rates could spike and downstate communities could be negatively impacted if the state moves toward 100 percent carbon-free emissions too quickly.

“I don’t want to throw one part of the economy under the bus in order to lift this other side up. … I think it’s important we all coexist together,” Rep. Chris Miller, an Oakland Republican, said, adding that the coal industry in his district could be negatively impacted by carbon-cutting legislation.

Clean energy advocates, on the other hand, said the goal is to add renewables to the market, not to edge other industries out. In Davis’ bill, this would be done by increasing the rate cap for renewable investment, which would add another $2 to $3 to residential customer bills “over a span of about eight years.”

Still, Illinois Coal Association President Phil Gonet said last week that coal is being left out of negotiations, even though it is a large energy provider which helps to keep costs low.

He said wind and solar are intermittent energies, while coal is always available, providing more consistency to the market. In 2018, he said, 54 percent of Illinois’ energy was generated by nuclear plants, 31 percent from coal, 7 percent from natural gas and 8 percent from renewables.

Republican Reps. C.D. Davidsmeyer of Jacksonville and David Welter of Morris argued for an “all-of-the-above” approach to energy, including all of Illinois’ various energy sectors in negotiations to increase renewables while keeping prices low throughout the state.

“I would love to move to renewables as soon as we possibly can, but the reality is it would be very difficult without impacting ratepayers drastically,” Welter said.