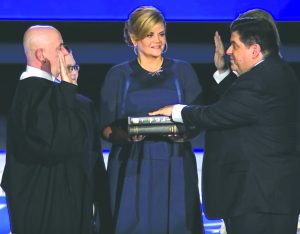 J.B. Pritzker is sworn in Jan. 14 as governor of Illinois. The chairman of the Illinois Republican Party said that Pritzker raising the salaries of his inner circle will likely mean an increase in pay for all state workers and more money out of taxpayers’ pocket. (BlueRoomStream.com)

The leader of the state Republican Party is not giving Gov. J.B. Pritzker any honeymoon period, already ripping the new governor for the message that increasing top administrators’ salaries gives to rank-and-file workers.

Tim Schneider, chairman of Illinois Republican Party, said that not only does the doubling of salaries for the top people around Pritzker “trample ethical limitations on private payments to public servants, but it sends a clear message to all other government workers too — more is coming to you.”

Schneider said Pritzker is not going to reach into his own pocket to hike the salaries of all state workers.

“Will Pritzker supplement the pay for all these folks too?” Schneider asked. “Don’t bet on it: recall this is the billionaire who dodged hundreds of thousands of dollars in property taxes on his Chicago mansion and hides his wealth in the Bahamas to avoid Illinois’ already high taxes — paying literally no state income tax in 2014.”

Schneider said with Democrats controlling every level of state government they are “unchecked by anything but their own shame and the strength of our voices calling out their abuse and extremism.”

He said Pritzker raising his inner circle’s salaries is a glimpse of what’s to come: more money for state government workers, increased debt and higher taxes for Illinois residents.

“What a deal!” Schneider mocked in an email, giving his thoughts on the new administration.

Schneider said Pritzker has signaled that the highest-paid government workers in the Midwest don’t make enough money. Increases will now also be expected from rank-and-file workers, according to the Illinois Republican Party leader. 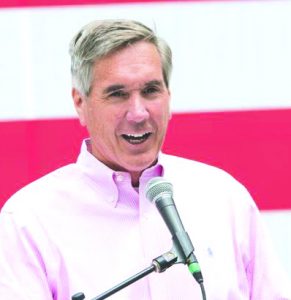 “This higher pay is coming from you,” he said to Illinois residents. “And, with Illinois’ appalling pension system, higher pay today means higher pay forever. So, generations of Illinoisans who don’t work for government and have no right to maintain their salary when they stop working for their current employer will pay for Pritzker’s ‘largesse.’

“Remember, it’s your money, not his, that he’s offering to spend. He won’t move his wealth from the zero-tax Bahamas to pay either the current taxes or the higher taxes he proposes and, being born a billionaire, he has no real idea what each dollar means to the rest of us.”

Schneider said Pritzker’s proposal to legalize marijuana would not cure what ails the state.

“While taxing pot will generate some tax dollars, this new revenue is a minuscule fraction of Pritzker’s new spending — and it simply isn’t worth the terrible social tax that promoting pot imposes. Legal pot will lead to more (driving under the influence arrests), more fatalities, more opioid use and more bad options for our children,” Schneider said.

“It breaks my heart to think of the damage Democrats will do to this state; you don’t deserve it,” Schneider said to Illinois taxpayers. “But, there won’t be any confusion or obfuscation about who has done what: everything that happens here now is done by Democrats.”

When taking the oath of office as Illinois’ 43rd governor, Pritzker drew on Illinois’ history to share his vision of people working together to create another century of boundless opportunity and fulfill the state’s possibility and promise.

“At 200 years old, Illinois is still a young promise,” Pritzker said. “Our time here has been but a blink. In 2019, we must begin a new century with new maturity — and enough foolishness to believe we can make a difference.”

“Our history is a story of leaps forward and occasional stumbles back — and a promise renewed with each generation that we will try harder, that we will do better, that big breakthroughs are built on centuries of selfless effort by unheralded heroes,” Pritzker added. “That big change rides on what we do together, not what one person attempts alone.

The governor also made it clear that he will move swiftly on priorities for working people so that the government works for the people and will confront the state’s deep challenges with honesty and courage — with an understanding that “the seemingly dry acts of government really do affect the richness and joy of our lives.”