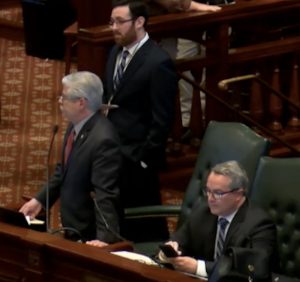 State Rep. Fred Crespo (D-Hoffman Estates) talks on the state House floor in support of a program to reimburse public entities for incentives used to bring convention business to their community. “They have to prove the fact that they generated new business in the state of Illinois,” said Crespo, who sponsored legislation to extend the program until 2022. (Blueroomstream.com)

A program to reimburse municipalities and other public entities for incentives used to draw convention business to their town has been recommended for approval despite one lawmaker contending it handicaps private entities fighting for the same business.

The Illinois House has recommended a two-year extension of the program that allows units of local government, municipal convention centers and convention center authorities to be reimbursed by the state Department of Commerce and Economic Opportunity for expenses incurred in drawing conventions to their venue despite the expenses having taken place in a prior fiscal year.

The program, which was slated to end in 2020, would be extended another two years, if passed by the state Senate.

“It allows municipalities to offer incentives,” said state Rep. Fred Crespo (D-Hoffman Estates), sponsor of the legislation. “… They can only get the incentive paid back if they can prove to DCO that absent incentive they never would have had the business. So they have to prove the fact that they generated new business for the state of Illinois.”

State Rep. Steven Andersson (R-Geneva) pointed out that not every convention center benefits from the incentive-payback program.

Andersson said he objected to extending the program another two years.

“That’s two more years that my communities and my convention centers can’t benefit from it,” the Geneva representative said.

State Rep. Peter Breen (R-Lombard) noted that the Governor’s Office of Management and Budget was opposed to the legislation “because they believe the bill would undue previous budget management steps.”

“We are always having trouble meeting our budget so I guess there was some thought that they wanted to reduce the amount of spending in this program,” Breen said during House debate on the issue Thursday.

Representatives of the governor’s Budget Office did not respond as of press time for a request for comment regarding their opposition to Crespo’s legislation.

He said municipalities have made incentive commitments to convention businesses and barring the state reimbursement program they are out that money. Crespo said without the state program he doubted if municipalities would offer any incentives to bring in new business.

Crespo said because of the incentive-payback program, Schaumburg was able to attract two new conventions. The expected state paybacks allowed the village to offer “wiggle room” that hooked the businesses, Crespo said.

State Rep. C.D. Davidsmeyer (R-Jacksonville) said the program sounds like a way for convention-seeking public entities to replenish their coffers.

Incentives are intended to be “prospective,” the Jacksonville representative said. “You are moving forward so I think an after-the-fact reimbursement is completely different,” he said.