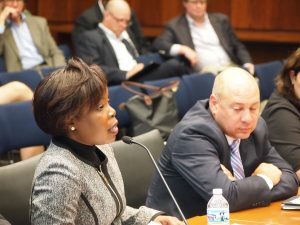 Kaleshia Page, government affairs manager for Comcast, talks to state lawmakers about the company’s Internet Essentials program, providing eligible families with high-speed Internet at a reduced rate. Next to Page is Randy Nehrt, president of the Illinois Telecommunications Association.

State Rep. Letisha Wallace (D-Rockford) notes that despite advances in technology, the digital divide between people with and without Internet access still remains.

“Over time that divide hasn’t shrunk,” said Wallace, who led a state House hearing on the issue Aug. 7.

Wallace noted that according to Pew Research studies, 62 percent of households in America that make less than $30,000 a year have access to the Internet.

Randy Nehrt, president of the Illinois Telecommunications Association, representing more than 50 telecommunications and broadband service providers in the state, said it is not because of a lack of product availability that Illinois’ numbers may be lagging. He noted that 98 percent of housing units in Illinois have access to broadband Internet service.

“Broadband Internet has become a critical tool in our lives. There’s no doubt about that,” said Nehrt, who works for AT&T. “It improves education. It’s critical for job searches. It can facilitate job training, eliminate barriers to medical service and improve the quality of life in general for citizens of the state.”

Wallace said that previous state efforts to address the digital divide have stalled over the past 10 years. It is vital for the state’s future that communities of color have access to high-speed Internet service, she said.

The state representative said she wants to ensure that when new technology emerges it is not the case that “some individuals are left behind because they do not have access to those advances.”

Wallace, who holds a doctorate in education psychology,  pointed out that teachers’ assignments can be impacted by whether students have access to the Internet at home or not.

She said teachers in higher-income schools do not report those challenges. 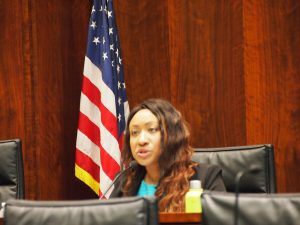 State Rep. Letisha Wallace (D-Rockford) said teachers in low-income areas have reported difficulties in assigning technology-related work because of a lack of access to technology in students’ homes. She noted that teachers in higher-income areas do not have those same challenges. Wallace and other state House members want to close the digital divide in Illinois (Kevin Beese/Chronicle Media photos)

To ensure Internet access for all, Wallace said, the idea of the Internet being a public utility has been floated among lawmakers.

“In terms of STEM (science, technology, engineering and math) education and STEM careers and our future economy, we know how important this is,” Slaughter said. “It is my hope that Illinois can be a leader in this category.”

State Rep. Margo McDermod (R-Mokena) said she is concerned with the digital divide as it pertains to women and how digital literacy is being taught in schools.

“Manufacturing may make a rebound, but it is never going to be what it was in our parents’ generation,” McDermod said. “If the jobs of the future are digital jobs, what are we doing to prepare all our young people for these jobs? Whether they are suburban kids, like I represent, or rural kids or urban kids, all of our young people need to be prepared for what I think are the fastest-growing jobs in the state which are digital jobs. Virtually every job, even if you are working a line – you’re working a line, you’re working at Amazon – you’re working with a screen.”

The state, McDermod said, needs to make sure it is training young people for the jobs in the economy of the 21st Century.

Kaleshia Page, government affairs manager for Comcast, noted that it was seven years ago at Chicago’s Woodson Library where Comcast unveiled its national Internet Essentials program, providing eligible families with high-speed Internet for $9.95 per month.

“Internet Essentials helps remove the barriers that make it difficult for low-income families to take advantage of the academic, economic and other opportunities that come with a high-speed Internet connection,” Page said.

She noted that families who qualify for free or reduced-price lunches through the National School Lunch Program qualify for the Comcast program. The program has helped more than 480,000 Illinois residents connect to the Internet at home, according to Page.

“I’m proud to say that since its inception in 2011, Internet Essentials has helped more than 4 million low-income Americans gain access to the Internet at home, many who otherwise wouldn’t have been able to afford it or would have had to make a choice between Internet service and another expense,” she said.

Page noted that besides Chicago some of Comcast’s strongest partnership are in Peoria, where the telecommunications firm partners not only with the Peoria Public Schools system and its Parent University program, but with the Peoria Dream Center which annual helps 3,000 kids get ready for school.

She noted Comcast also partners with The African American Men of Unity organization in Aurora.

Page said that in a recent survey, 93 percent of Internet Essentials participants said they feel the program has had a positive impact on their child’s grades. She added that 62 percent of survey respondents said that the service helped someone in their household look for or obtain employment.

“Moreover, because of Internet Essentials, children don’t have to go out in the elements to a library or a fast-food restaurant in search of Internet access to do their homework,” Page said. “Parents, looking to provide better lives for their families, now have a resource at their disposal to apply for assistance, to register for continuing education courses and to look for employment.”