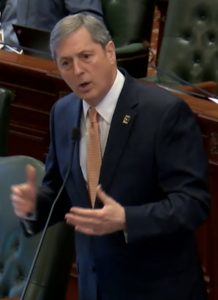 Starting Illinois teachers could soon be guaranteed a $40,000 salary.

The Illinois House has passed legislation that would require that every school district in the state provide a starting salary of at least $40,000 as of July 1, 2019. The legislation now moves to the state Senate for consideration.

“We have 2,000 full-time teaching positions unfilled in the state,” said state Rep. Jay Hoffman (D-Swansea), sponsor of the legislation. “We have a chance to keep teachers here by paying them. Someone shouldn’t have to live with their parents for five years to pursue their passion.”

State. Rep. Tim Butler (R-Springfield) said it is easy for representatives from Northern Illinois communities, where the cost of living is higher, to think a higher guaranteed minimum starting salary is a great idea.

“This is the mandate of all mandates,” Butler said during debate on the issue April 25. “This is going to have a detrimental effect on schools in my district most certainly.”

The House approved the measure in a primarily partisan vote, 61-38.

Republicans voting for the measure were Dan Brady of Bloomington, John Cavaletto of Salem and Bill Mitchell of Forsyth.

Democrats voting against the higher minimum starting salary for teachers were Jerry Costello of Salem, Natalie Phelps Finnie of Elizabethtown and Carol Sente of Vernon Hills.

State Rep. Kathleen Willis (D-Addison) said that Illinois has continued to see teachers leave the state and needs to do something to address that.

“They leave because we don’t pay them adequately,” Willis said. “We are not going to lead the state of Illinois without top teachers. We need to keep our teachers here.”

Willis said the minimum $40,000 threshold is not going to make anyone rich, but simply give teachers a livable wage.

Her daughter, a teacher who stayed with her for five years before moving out on her own, was the example Hoffman used in his statement.

“I don’t think we are overreaching by any means,” Willis said of the $40,000 minimum salary for teachers. 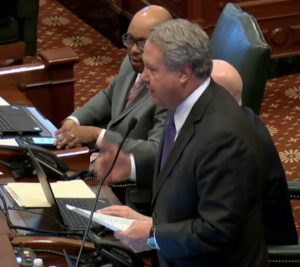 State Rep. Jay Hoffman (D-Swansea) talks in favor of legislation he sponsored to guarantee a $40,000 salary for a starting teacher in Illinois. “We have a chance to keep teachers here by paying : State looks to raise minimum salary for teachers them,” Hoffman said. (BlueRoomStream.com)

Hoffman noted that the average starting teacher’s salary in the state is $39,300 so most districts would not be substantially impacted by the change.

The proposal to raise starting teachers’ salaries has the support of the Illinois Education Association.

State Rep. David Harris (R-Arlington Heights) said by approving the bill, House members would be locking many school districts into having to find more money to pay their teachers.

“It’s the school districts’ money we are spending,” Harris said. “You are asking me to vote to raise taxes in some districts.”

He said some districts would simply not be able to pay starting teachers $40,000.

Hoffman said Illinois needs to take action so that its best and brightest don’t move to Missouri and other states because of higher starting salaries for teachers.

The last time the state set a minimum salary for teachers was in 1980 when the minimum starting salary was put at $9,000.

State Rep. Chad Hays (R-Catlin) asked Hoffman if he was willing to set a ceiling on teachers’ salaries to go along with the minimum salary he sought.

When Hoffman said he was not, Hays responded, “There’s your answer,” calling on lawmakers to reject the proposal.

State Rep. Barbara Wheeler (R-Crystal Lake) said that she represents an area heavily taxed due to high teachers’ salaries. She noted that one of the school districts in her area has an average teacher’s salary of $90,000.

She felt it was wrong for lawmakers to dictate what all districts should pay starting teachers.

Batinick said that a $40,000 minimum starting teachers’ salary is out of line for many districts in southern Illinois.