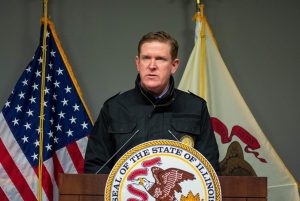 Illinois State Police Director Brendan Kelly is pictured at a news conference at the Illinois Emergency Management Agency building in Springfield in January. He testified before a state task force on changes to the law that he said would aid in investigations of expressway shootings. (Capitol News Illinois file photo)

“It’s almost like a modern day form of dueling,” Kelly said. “Whether it’s motivated by gang issues, personal issues, or neighborhood issues, they’ll say things to each other and then insult one another and say well let’s take it out on the E-way.”

He noted that people choose expressways since the speed allows suspects to escape more easily and increases the excitement, there are fewer cameras to capture what suspects are wearing and other identifying features, and it’s difficult to track down witnesses.

When police investigate an expressway shooting, Kelly said, they have to obtain evidence from phones, cell towers and social media accounts to verify and identify people involved with violent shootings. Kelly said a deadline needs to be given to tech companies for information to be provided in a timely manner.

Kelly suggested that when it comes to violent and forcible felonies, lawmakers should change the statutes to allow tech companies 36 hours from the moment investigators deliver a search warrant to turn over information.

Rep. Frances Hurley, D-Chicago, asked what more the legislature can be doing to help with expressway shootings. 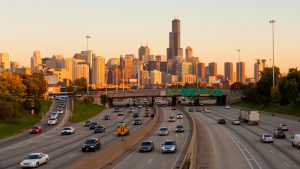 The Dan Ryan Expressway in Chicago. In 2021, there were 273 shootings on Chicago expressways. (Photo courtesy of University of Illinois)

Kelly said he would like to see aggravated discharge and reckless use of firearms further defined in the aggravated offenses section of the Illinois Criminal Code to reflect the inherent danger of the discharge of a firearm on the expressway.

“I just want to be clear that the things that we’re recommending and we’re discussing here are not broad,” Kelly said. “Let’s get to the actual language of the statute and update it to reflect the conduct that we see occurring that’s putting people at risk of public safety.”

Even when no one is killed or injured, Kelly said that discharging a firearm on an expressway should be considered as an aggravated and reckless discharge of a firearm due to the inherent danger to bystanders.

Under the proposed Expressway Camera Act, ISP, the Illinois Department of Transportation and Illinois State Toll Highway Authority would be required to work together to increase the number of cameras along expressways in Cook County.

Installation also includes a communication system that backs up video images to a central location where additional software is then used to search and match license plates to existing license plate and vehicle databases.

Kelly also said the passing of Gov. J.B. Pritzker’s proposed budget for ISP would help in terms of staffing to address expressway shooting.

In the proposed fiscal year 2023 budget, Pritzker proposed $18.6 million in general funds to support three ISP cadet classes to hire and train 300 officers with a portion of those officers patrolling expressways in the ISP Chicago district.

At a February news conference, Pritzker said ISP is working with the Chicago Police Department, U.S. Department of Homeland Security and local law enforcement agencies to apprehend individuals. Pritzker and Kelly said more than 20 arrests have been made in recent months related to expressway shootings.