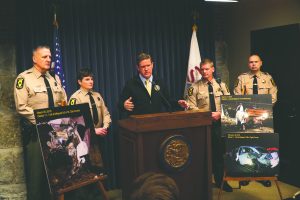 SPRINGFIELD — Already in 2019, motorists have hit 14 squad cars stopped along Illinois roads. One of those incidents cost an Illinois State Police trooper his life.

“This information is obviously extremely concerning,” acting ISP Director Brendan Kelly said Tuesday during a news conference at the capitol in Springfield. “While only one of these impacts resulted in a fatality, that is one too many.”

In January, trooper Christopher Lambert was struck and killed along Interstate 294 near Northbrook while he was assisting at an accident scene. It’s the worst-case scenario among incidents occurring more often, Kelly said, despite a law that requires motorists to move over and slow down for emergency vehicles that are stopped and have their hazard lights flashing.

Scott’s Law was passed in Illinois in 2002. In 2013, the law was extended to apply to other vehicles, including ambulances and tow trucks.

Kelly said so far in 2019 there have been 494 recorded violations of the law, compared to 184 during the same period last year.

Kelly blamed the increase on distracted and impaired driving.

“The amount of distracted driving out there is something everybody is sensitive to,” Kelly said. “And it’s increasing, at least anecdotally, from talking to our colleagues across the country.”

As he spoke during Tuesday’s news conference, Kelly was flanked by photos of recent collisions, mangled squad cars hit by distracted or impaired drivers, which Kelly said have resulted in injuries ranging from concussions, lacerations and muscle tears, to ruptured and bulged discs, compound bone fractures — and a death. 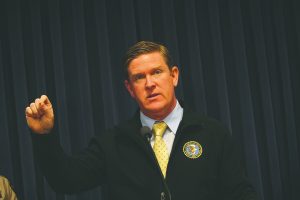 Acting Illinois State Police Director Brendan Kelly speaks during a news conference Tuesday at the capitol in Springfield. Kelly called “extremely concerning” an increase this year in the number of incidents of moving vehicles colliding with parked police cars and officers along Illinois roads. (Photo by Lee Milner/Illinois Times)

It was the ISP’s second stop on a three-day trip across the state to remind people of the law. A stop in Belleville is planned Wednesday.

Kelly and other officers held a news conference Monday in Chicago with Gov. J.B. Pritzker, who described the anguishing call he made to Lambert’s family in January, notifying them of the accident.

On Tuesday, Kelly referenced a plan to increase Scott’s Law enforcement by allocating an extra 2,000 man hours and using “some new and creative techniques” devoted to catch drivers breaking the law.

“If you see a squad car with warning lights on, don’t assume it’s a lone trooper just doing a regular traffic stop,” Kelly said. “You could have eyes, video, and other instrumentation all around you as part of a special Scott’s Law detail.”

Asked to elaborate on the new tactics, which will be paid for with ISP’s existing funds, Kelly said he was “not going to spell it out right here.”

The 14th recorded collision with a parked squad car occurred March 20, when a state trooper and his parked squad car were hit by a semitrailer along Interstate 55 in Collinsville. The officer was outside his car when the crash occurred, and suffered serious injuries. The squad car was demolished.

“If you see an emergency vehicle with their lights activated,” Kelly said, “please slow down and move over. It’s the right and safe thing to do, but failure to do so could also result in prosecution.”

Those who violate Scott’s Law face fines from $100 to $10,000 and a possible loss of a driver’s license. The law is named after Chicago Fire Department Lt. Scott Gillen, who was struck and killed while assisting at a crash scene on a Chicago expressway in December 2000.