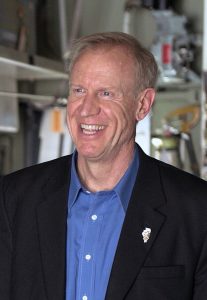 Gov. Bruce Rauner said passage of the state budget showed bipartisan effort and compromise. “We worked together to provide a budget to the people of Illinois that can be balanced, with hard work and continued bipartisan effort to deliver on the promises it makes,” Rauner said. (U.S. Air National Guard photo by Staff Sgt. Lealan Buehrer)

In the end, everyone got something they were seeking with the state budget: Democrats got more money for social service providers and schools; Republicans got no new tax increases; and lawmakers all were able to head home on schedule.

After a historic two-year stalemate on the budget, this one was anticlimatic, with little discourse and gnashing of teeth.

Gov. Bruce Rauner said he would be taking action to enact the state’s fiscal year 2019 budget.

“We started this year’s budget process with the common-sense goals of a full-year balanced budget and no new taxes,” Rauner said. “With this budget, we can come as close as any General Assembly and governor in Illinois have come in a very long time.

“It’s a step in the right direction, though it does not include much-needed debt pay down and reforms that would reduce taxes, grow our economy, create jobs and raise family incomes.”

Rauner said General Assembly passage of the budget last week was the result of bipartisan effort and compromise.

“We worked together to provide a budget to the people of Illinois that can be balanced, with hard work and continued bipartisan effort to deliver on the promises it makes,” the governor said. 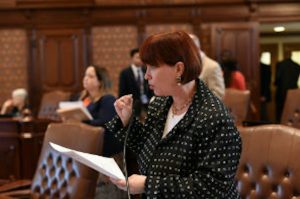 State Sen. Heather Steans (D-Chicago) said the budget was the result of negotiations among all four legislative caucuses and represented real compromise.

“It is truly balanced spending within our means while implementing some cuts and pension reforms to keep our state on a path toward fiscal stability,” Steans said of the budget deal. “Above all, the budget is an investment in our communities. From funding for cities and towns to social services to providing educational opportunities, I believe Illinoisans young and old will fare better under this budget than they have in years.”

State Sen. Dale Righter (R-Mattoon), who served as a budget negotiator for the state Senate Republican Caucus, said he was pleased with the compromise budget.

“When we began this year’s budget negotiations, my Republican colleagues and I made it clear to the Democratic majority that there would be no tax increase; and it must be a workable, balanced budget,” Righter said. “This budget meets those criteria.”