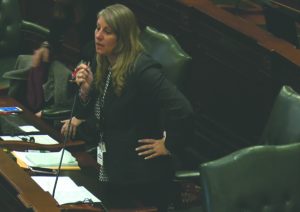 State Rep. Stephanie Kifowit (D-Oswego) talks about brewing a patch of Legionnaire’s disease for her Republican peer Peter Breen (R-Lombard) to infect his family with after Breen questioned a potential increase in damages awarded for wards of the state, including families of victims of the Quincy Veterans Home ‘s Legionnaire’s outbreak. (BlueRoomStream.com photo)

A state representative is under fire for wishing ill health and death on the family of a peer.

State Rep. Stephanie Kifowit (D-Oswego) verbally attacked state Rep. Peter Breen (R-Lombard) during a heated discussion Nov. 27 on legislation to raise the cap on damages to individuals in the care or custody of the state.

The raising of the cap for the state’s Court of Claims from $100,000 to $2 million was inspired by the families of the 13 individuals who contracted Legionnaire’s disease and died at the Quincy Veterans Home, according to state Rep. Al Riley (D-Olympia Fields), sponsor of the bill.

Breen ripped the legislation, up for a veto override, saying he supported it originally because he viewed it as a “starting point for negotiations (with Quincy Home families), not a giveaway to the plaintiffs’ personal injury lawyers.”

Breen said the change would have a huge impact because it would allow multiple claims of $2 million on the same incident.

Kifowit, an alternate chief co-sponsor of the bill, was angered by Breen’s comments about the bill, which she viewed as a slight to the families of Veterans Home residents.

“I would like to make him a broth of legionella and pump it into the water system of his loved one so that they would be infected, they could be mistreated, they can sit and suffer by getting aspirin instead of being properly treated, and ultimately die,” Kifowit directed toward Breen, who appeared to be out of the chamber during her statement. “We are talking about our nation’s heroes.” 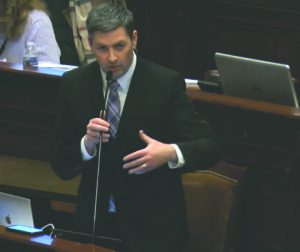 State Rep. Peter Breen talks about his concerns on raising potential damages for wards of the state up to $2 million. Breen’s comments, directed at potential settlements with victims of the Quincy Veterans Home’s Legionnaire’s outbreak, brought a heated response from his peer Rep. Stephanie Kifowit. (BlueRoomStream.com photo)

While Kifowit went on for another four minutes about how veterans were mistreated and couldn’t figure out how the director of the state’s Public Health Department still had a job after the Quincy tragedy, it is her opening statements that has caused a stir.

She would later apologize, but not before first saying her statement were misconstrued and misinterpreted.

After Republicans and social media posts called for Kifowit to step down, she issued a statement that she was sorry for her ill-advised words directed at her peer.

“I offer my sincere apology to Rep. Peter Breen, his family, and all of my House colleagues for my poor choice of words during a serious discussion on our veterans’ health and safety,” Kifowit said in her apology. “I would never wish any harm or mortality on anyone’s family, including the Breen family.  As a Marine Corps veteran, I feel very passionate about what happened in our Quincy Veterans Home, which resulted in 13 veterans and one spouse’s deaths, in addition to over 70 individuals being ill. The truth is this did happen to our heroes, and my attempt to illustrate empathy for the families that were affected by the loss of their loved ones was not conveyed properly.

“Lost in my comments was our obligation to work together on behalf of our veterans to ensure that the situation in Quincy never happens again. As legislators, we are fallible people, but we are tasked with the tremendous responsibility of caring for the veteran men and women who have never let us down. We owe them so much more.

“I look forward to working with my colleagues to expand access to health care and mental health resources for our veterans.” 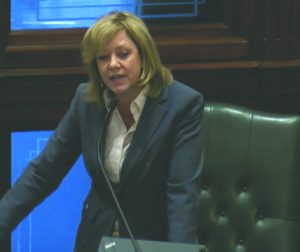 The Illinois Republican Party had called for Kifowit to step down and said, at the minimum, Governor-elect J.B. Pritzker and House Speaker Michael Madigan (D-Chicago) should take Kifowit to task for her statements. Neither Pritzker nor Madigan made any public comments about Kifowit’s rant.

“Illinois Democrats sunk to a new low, when Democratic State Rep. Stephanie Kifowit wished death upon family members/loved ones of her Republican colleague, state Rep. Peter Breen. Kifowit should be ashamed of her remarks,” said Tim Schneider, chairman of the Illinois Republican Party.

When Kifowit had initially refused to apologize, Schneider said she should resign “as these remarks are unfit for someone serving public office.”

In November, Pritzker appointed Kifowit to the Serving Illinois’ Heroes Committee, giving his transition team input on veterans’ issues. No notice of that committee’s makeup changing has been put forth by the governor-elect’s transition team.

Schneider wondered if Pritzker would take action after Kifowit’s comments.

“Does the governor-elect condone Kifowit’s rhetoric?” Schneider asked. “Will he keep her on his (Illinois’ Heroes) committee?”

The Republican leader said Democratic bosses should send a message about the Oswego representative’s statements.

“As leading Illinois Democrats, both Governor-elect Pritzker and Speaker Michael Madigan have a duty to speak out against Representative Kifowit’s extreme rhetoric and tone down out-of-control public discourse. They should do so immediately.”

“We have a Democratic colleague who essentially wished death on a Republic floor speaker,” Ives said from the House floor. “How dare you? How dare you concoct up some kind of story about brewing up some batch of Legionnaire’s and having him feed it to his family?”

“… How dare you take an honest debate about an issue and then wish death on my colleague Peter Breen, his wife, and his two adopted kids? It is unbelievable, unbelievable but just par for the course,” Ives said.

She said her Democratic colleagues all owed Breen an apology.

“We can’t discuss an issue here without you guys wishing death on Republicans? It’s just unbelievable,” the Wheaton representative said. “You talk about the divisiveness in our political sphere and this is why it is — the lies, the innuendos, the overreach, the vilifying of colleagues on a debatable issue. How dare you? How dare you do that to my colleague Peter Breen? He deserves an apology by all of you.”

Breen stood and banged his desk in anger after Ives’ comments.

The House overrode the governor’s veto to raise the Court of Claims cap to $2 million in a 71-36 vote.