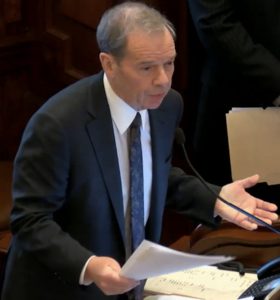 State Senate President John Cullerton (D-Chicago) speaks on behalf of legislation that could allow a state trooper to be reinstated despite marijuana being found in his system. The state has a zero-tolerance policy regarding marijuana for state troopers and Department of Corrections guards. (BlueRoomStream.com)

Trooper Michael Cokins, who suffered 15 broken bones, went through eight surgeries and had 17 months of physical therapy after a 2014 accident, is facing termination after testing positive for marijuana in his system.

Cokins suffered life-threatening injuries when a chronic drunken driver struck him in September 2014 on I-294 near Elmhurst. After a long recovery, the trooper tested positive for marijuana during a 2017 drug test; and the state has a zero-tolerance policy for troopers and correctional officers.

“He acknowledged that he made a mistake, that he had used cannabis two days before the test, mostly to relieve the pain that was constant in his life after this accident,” said state Senate President John Cullerton (D-Chicago), who led the effort for Cokins to have the opportunity to stay on the State Police force.

“It was the only time that he has used cannabis,” Cullerton said.  “… Given the circumstances I think it would be fair for us to give this guy a second chance — and anybody else in this situation.”

Cullerton’s proposed legislation would give the Illinois State Police Disciplinary Review Board and the Department of Corrections leeway in handling employees found to have used marijuana. As the statue reads now, troopers and correctional officers have to be fired when testing positive for pot.

The legislation Cullerton presented would change the wording of the statute to “may fire” instead of “shall fire.”

Cullerton’s bill passed both the Illinois House and Senate this spring, but Gov. Bruce Rauner vetoed the legislation this summer, saying he wanted language in the bill that only individuals with authority to use medical marijuana would be exempted from firing.

Cokins had not gotten approval for medical marijuana use, Cullerton said. 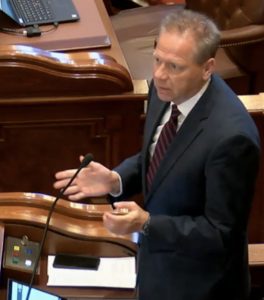 State Sen. Dale Righter (R-Mattoon) talks about his concerns about the state getting away from a zero-tolerance policy regarding marijuana use for state troopers and correctional officers. “We need an extra veil of protection,” Righter said in fighting a proposal to give the State Police Disciplinary Review Board and the Department of Corrections more leeway in dealing with employees found to have marijuana in their system. (BlueRoomStream.com)

In September 2014, less than a year after joining the State Police, Cokins was hit during a traffic stop of another vehicle on I-294 at St. Charles Road. Leslie Thurow, the driver of the car that hit Cokins, was charged with aggravated driving under the influence of alcohol, leaving the scene of an accident and aggravated reckless driving.

Thurow, of Mount Prospect, had a blood alcohol level more than twice the legal limit, police said. It was her fourth incident of drunken driving, according to law enforcement officials. She was sentenced to 13 years in prison for the incident.

Cullerton said Cokins went through a painful battle to recover.

“Really all he wanted to do to get through this struggle was to know that he could get back to work,” Cullerton said. “Every day as he fought to get stronger, his greatest desire was to get back on the job.”

Cokins returned to light duty with the State Police in December 2015 and was cleared for a return to full duty in May 2016.

“He had an exemplary record before and after this accident,” Cullerton said.

The Senate president said the Review Board and DOC should have the ability to consider employees’ body of work when considering their reinstatement after marijuana use.

Cullerton’s effort to override the governor’s veto passed 50-4. Only Republican Sens. Kyle McCarter of Lebanon, Dale Righter of Mattoon, Jil Tracy of Quincy and Chuck Weaver of Peoria voted against the override.

Not present for the Nov. 16 vote were: Republican Sens. Tim Bivins of Dixon, Tom Rooney of Rolling Meadows, Chapin Rose of Mahomet, Dave Syverson of Rockford and Craig Wilcox of McHenry.

Righter said Cokins’ case was prior to the General Assembly approving the legal use of medical marijuana.

“Now we have a statute that says someone can get a prescription for medical marijuana, if they need it,” Righter said. “Now, with all due respect, we are not talking about a clerk’s position in some department that doesn’t deal with people’s lives. It doesn’t deal with a state trooper driving 80 or 90 or 100 mph down an interstate trying to catch a fugitive … . These positions deal with people’s lives and I think it is clear and reasonable that it has been our law that we need an extra veil of protection, in other words, a zero-tolerance policy for people in those positions because they are so important.”

The potential override now moves to the state House for its consideration.