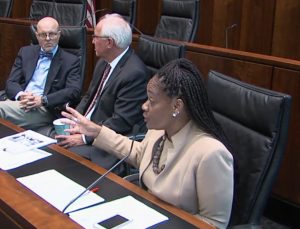 Most public universities in Illinois are falling woefully short of state goals for supplier diversity, according to a state agency.

A report by the state’s Department of Central Management Services shows that six of the nine public universities in the state were not even close to meeting the state goal of 20 percent of contracts being awarded to minority-, woman- and disabled-owned businesses for the recently completed 2017 fiscal year. None of the six were even at 6 percent of contracts meeting the diversity goal.

Universities failing to hit the goal were:

State agencies are at 27 percent of contracts awarded to minority-, woman- and disabled-owned businesses while universities stand at just 5 percent.

Ben Bagby, chief procurement officer for institutions of higher education, said part of the problem is a limited number of state-certified suppliers in some parts of the state.

“The geographic diversity of the universities makes it difficult sometimes,” Bagby said at a July 24 hearing about universities and diversity suppliers.

He noted that more than half of the certified Business Enterprise Program (for minorities, females and people with disabilities) vendors are in the Chicago area, limiting potential contractors for universities in central and southern Illinois and in the western part of Illinois. 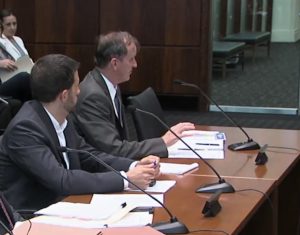 Ben Bagby (right), chief procurement officer for state institutions of higher learning, said because more than half of the minority-, woman- and disabled-owned business certified for state contracts are in the Chicago area, it can be difficult for state universities Downstate and in the western part of Illinois to hit diversity supplier goals. (Blueroomstream.com)

Bagby said there are schools, such as Western Illinois, that have limited BEP vendors but are still making the diversity contract goals.

Western was one of only three public universities in the state that met diversity contract goal.

Universities hitting the goal for FY 2017, according to the CMS report, were:

“It isn’t something that I’m going to say is a problem across the board,” Bagby said of the diversity contract numbers, “but there is a problem with the geographic diversity of the universities.”

State. Sen. Kimberly Lightford (D-Maywood) said she is tired of hearing alibis for why state universities are not hitting contract diversity goals.

“There’s always the blame game and pointing the finger, and no one’s held accountable,” Lightford said. “… It’s never been a priority for any administration I’ve served under for 20 years, never a priority. It’s the same meetings and the same excuses, and no follow-up and no follow through. As African-American legislators and minority legislators, we look at this stuff every year and there’s always excuses why it never gets better.”

She said she wants solutions not appeasement from agency leaders.

Lightford said there is intentional disconnect between the state agencies “so that we never get to the root of the problem.”

“We are never able to help the people who need it. You always use excuses about outreach, that you can’t find the people, that there’s no businesses there,” Lightford said. “There’s always an excuse.”

State Sen. Martin Sandoval (D-Chicago) said major changes need to made to the BEP Council where state agency leaders are on the board with volunteers determining diversity contact compliance.

“This whole thing of the wolf watching the hen house is back to accountability,” Sandoval said, “where you have state officials, state public servants sitting on the BEP Council. I mean, what gives? It’s a shell game. It’s a total mockery of democracy. It’s a shell game. Who are we fooling? You’ve got the same people sitting on the council doing all the administrative, senior work and analysis who are making the decisions.”