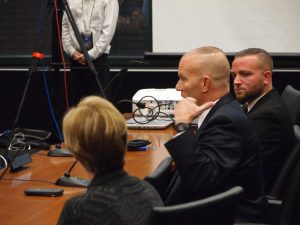 Scott Pavlock (center), a member of the Northern Illinois Critical Incident Stress Management Team, answers a question from a state House panel about police officers and the stress they face. He said first responders need to get the mental health treatment they need without their jobs being in jeopardy. At the table with Pavlock are Clare Keating of RE:ACT, a group that provide awareness, counseling and training for first responders; and Nicholas Gore of Transformations Drug and Alcohol Treatment Center in Delray, Calif. that has created a program for first responder dealing with stress. (Photo by Kevin Beese/Chronicle Media)

First in a series looking at the trauma first responders deal with and the impact it has on them and their families.

Scott Pavlock has led troops and police personnel. He saw two people killed in a motorcycle accident his first week as a police officer. Less than three weeks later, he handled the call of a baby who choked to death.

“I thought I had seen it all,” the Lake Zurich police sergeant said of his police and military careers.

However, it wasn’t until his cat died that Pavlock found himself curled up in a ball on the floor of his basement, not knowing what to do.

“I’m a command sergeant major in the United States Army. I’m a sergeant of a police department. I give orders,” Pavlock said. “I run into firefights. I’ve got to know what to do.”

Pavlock, a member of the Northern Illinois Critical Incident Stress Management Team board, said if he would have picked up the telephone and called for the professional help he needed that day his cat died, he is sure he would have wound up in treatment and without a job.

Pavlock likened the stress that first responders deal with to individual rocks that get put into a rucksack on the person’s back.

“Take one rock and carry it in your hand, it’s nothing,” Pavlock told state lawmakers at an Oct. 10 hearing on first responders’ stress and suicides. “Take a hundred rocks, put ’em on your back and walk around; it gets a little more difficult. Take a thousand rocks, add the divorces, the fights, the domestics, the alcohol, the things that we see every day.”

“If we seek help, if we go to remove a rock from our rucksack,” Pavlock continued, “we can lose our jobs.”

He said having the luxury of a sister who is a police social worker gave him the opportunity to pick up the phone and call someone without his job being in jeopardy. He said his sister explained the rucksack equation to him.

“Every cop goes to his next call with that rucksack on, with those rocks,” Pavlock said. “We need to take a knee …That’s what first responders need, a break.”

Illinois lawmakers are looking for ways to address mental health issues with first responders who are three times more likely to take their own life than to be killed in the line of duty.

Kevin Graham, president of the Chicago Fraternal Order of Police, said that he has brought up the need for increased time off for officers in every contract negotiation.

“If we’re working officers too hard, somehow that is going to manifest its way out into having problems in the department,” Graham said. “I think it’s important that officers not only have time off, but they spend time with their families, that they get to see a mental health professional when they need it. If we have good mental health in the police department, I think that serves everyone.

“If an officer makes just a momentary mistake – it only takes a few seconds – we will all be paying for it for a lifetime.”

Graham, a police officer for 35 years, said Chicago officials do not want to look at how hard they have been working officers in very tough neighborhoods, handling call after call, maybe not even getting lunch.

The Chicago FOP representative said he remembers his time on the street and calling in for permission to use personal time because he had to go to the bathroom and being denied, with the response being “You have to handle this call first.”

Graham said he is not sure how the state can mandate that municipalities help first responders, but said it would be a key component to help ensure officers’ safety and help them better serve the public.

“We have been excluded from the table for years,” Graham said, “and this has led to problems in police departments.”

He said providing mental health professionals when officers’ need them and police and fire departments having adequate employee assistance personnel available to first responders would negate the need for mandatory annual psychiatric testing, a step that some lawmakers have proposed.

“(Officers) will take the help if it is there, if it is confidential,” Graham said.