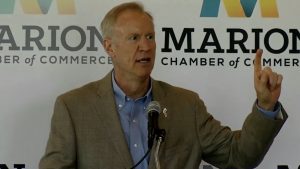 Private schools could play a key role in the future funding of public schools in Illinois.

Part of the deal that got all four legislative leaders on the same page regarding school funding includes providing tax credits to people who donate money for private school scholarships.

Under the proposal, taxpayers would get 75 cents of every $1 donated to private schools as a tax write-off.

An estimated $75 million in private school scholarships would be offered via the tax credits.

“Senate Bill 1 was designed to fix the inequitable school-funding formula for the state of Illinois and remedy the state’s position as last in the nation for education,” CTU leaders said in a statement. “This current deal is a naked attempt by billionaire right-wing ideologue Gov. Bruce Rauner to push through a reverse Robin Hood scheme that siphons money from poor school districts and lets the wealthy avoid paying their fair share in taxes.

“The Chicago Teachers Union, along with a broad-based group of education organizations throughout the state, rejects this latest scheme and calls on legislators to vote this idea down.”

EdChoice, a nonprofit, nonpartisan organization based in Indianapolis and dedicated to advancing full and unencumbered educational choice as the best pathway to successful lives and a strong society, notes that there are 21 tax-credit scholarship programs currently active in 17 states, including neighboring Indiana and Iowa.

Representatives of the organization note that tax-credit scholarships have been upheld as constitutional because money is never going into pubic education coffers.

“Tax-credit scholarships allow taxpayers to receive full or partial tax credits when they donate to nonprofits that provide private school scholarships,” the organization’s website states. “Eligible taxpayers can include both individuals and businesses. The amount of tax credits distributed is capped at an amount determined by the legislature, which, in turn, affects the availability and size of scholarships.”

The proposed funding agreement calls for the tax credits for Illinois private school supporters to end after five years.

EdChoice estimates that there are 257,650 tax-credit scholarship recipients in those 17 states. Florida has more than one-third of those participants, with 97,457 individuals enrolled as of this past winter.

The Chicago Teachers Union also ripped Chicago’s mayor for going along with the plan.

“Mayor Rahm Emanuel’s shameful, tacit support of school vouchers continues to prove that he should have never been given the privilege of heading our school district,” union reps contend. “Under his leadership, our school communities are under the pressure of payday loans that take the form of $1.5 million per day in interest payments to Wall Street banks — money that could better be used for trauma counselors, pre-kindergarten teachers and school support personnel.”

Union reps said they were dismayed that Emanuel failed to secure school revenue at the city and state levels and is now supporting a plan that will give money to private schools that could be directed to public school classrooms.

CTU President Karen Lewis said that the Chicago mayor supporting what amounts to a voucher system is a slap in the face to the city’s students and residents.

“Vouchers are a double whammy aimed at the heart of public education, and to be frank, amount to stealing from the same black and brown children to whom he claims to be providing sanctuary and equity,” Lewis said.

“As many have reiterated time and time again for years on end, the inequities that deepen with each passing day in our public schools are a horrible stain on our great state,” Manar said in a statement. “The status quo is unjust and immoral. Our goal is simple: create a system that is both adequate and equitable for all children. I look forward to continuing to work with my colleagues on both sides of the aisle to get this job done.”

Manar noted that important work still remains to bring together the final details.

“It appears that generational change to cure the least equitable system of school funding in America is well within our reach,” he said.

“The legislative leaders appear to have reached a bipartisan agreement in concept …” the Democratic power brokers issued in a statement Thursday.

It was anticipated that the school-funding deal could be voted on as soon as Monday. Results of that potential vote were not available as of press time.

“The four legislative leaders and the governor reached an agreement in principle on historic school-funding reform,” the Republican leaders said. “Language will be drafted and details of the agreement released once the drafts have been reviewed.”