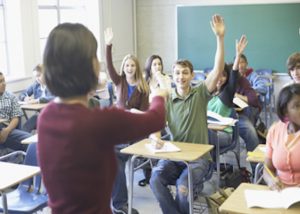 Of the 29 public high schools in the Chronicle’s readership area with teacher salaries averaging more than $100,000, less than half of them (14) had SAT scores in the top 20 for their respective county.

However, the average teacher’s salary in Niles Township District 219 is $113,569, more than double the $56,600 average salary in Princeville Community Unit District 326. Princeville’s salary figures are skewed a little downward because the unit district includes elementary school teachers, who typically make about $10,000 less than their high school peers. However, even tacking $10,000 onto the average Princeville teacher’s salary for the elementary-high school difference, the high school’s teachers are still just at 59 percent of the average Niles Township teacher’s paycheck.

An analysis of public high schools in the Chronicle readership area shows that teachers’ salaries are not always a guarantee of student success.

Of the 29 public high schools in the Chronicle’s readership area with teacher salaries averaging more than $100,000, less than half of them (14) had SAT scores in the top 20 for their respective county.

Achieving the highest number of students meeting standards with the highest average pay for teachers in the county were:

Half of the four Collar Counties in the Chronicle circulation area had the same high school at the top of both the average teacher’s pay and students hitting state standards:

Two schools in the Chronicle circulation area had the dubious distinction of having the highest average teachers’ salary in their county, but being close to the bottom in county rankings for student achievement.

Open the Books, a government watchdog organization, notes that there are 18,975 public school teachers and administrators in Illinois who made more than $100,000 in 2016.

Despite the number of teachers and administrators earning six figures in the state, a study by the Illinois Economic Policy Institute and the Project for Middle Class Renewal at the University of Illinois at Urbana-Champaign contends that Illinois public school teachers are not overpaid.

“Public school teachers in Illinois are highly skilled and are compensated accordingly through competitive salaries,” the report states.

The report, authored by Jill Manzo, Robert Bruno and Frank Manzo IV, and published earlier this year notes that 62 percent of full-time public elementary, middle and secondary school teachers in the state have earned master’s degrees.

The authors noted that private and nonprofit sector workers with a bachelor’s degree earn more than $76,000, more than $11,000 more than the average public school teacher in the state.