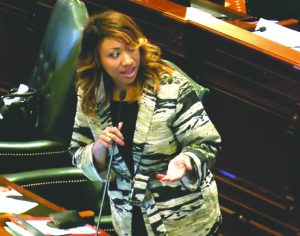 State Rep. Litesa Wallace (D-Rockford) talks about the importance of having teachers on the State Board of Education. “Typically when we are compiling boards related to a particular profession, we seek individuals from that profession because of their expertise,” Wallace said. (BlueRoomStream.com

Three teachers could soon earn spots on the nine-person Illinois State Board of Education.

The state Senate will consider the measure after the House of Representatives overrode the governor’s veto of the proposal.

Under the legislation proposed by state Rep. Linda Chapa LaVia (D-Aurora), a teacher from Cook County, one from the collar counties around Cook, and one from central or southern Illinois would all be assured positions on the governing body.

“Don’t you think it would be very prudent of us to make sure that somebody who knows about education, that is certified in education, that has the pedagogy in education is able to sit at the table to make sure they are representing the whole state of Illinois in terms of teaching communities?” Chapa LaVia asked when questioned on why she was looking to limit governors’ hands on appointments to the ISBE.

“I don’t see the point of doing this and tying the executive branch’s hands,” state Rep. Peter Breen (R-Lombard) said.

The proposal has the backing of the Illinois Federation of Teachers, the Chicago Teachers Union and other educational labor groups seeking to change the composition of the State Board of Education.

“There’s not been any need identified for this,” Breen said. “There is no need to tie the hands of Governor Pritzker and the hands of every other governor to come from this point forward.”

State Rep. Litesa Wallace (D-Rockford) said she knew of no other professions where a governing body of people not in the industry could make major decisions affecting the industry. 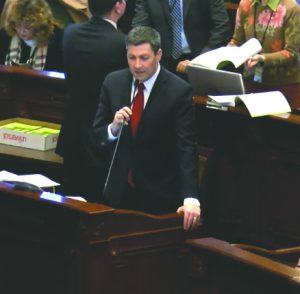 State Rep. Peter Breen (R-Lombard) questions the need for changing the make-up of the Illinois State Board of Education. “There is no reason to tie the hands of Gov. (J.B.) Pritzker and the hands of every other governor to come from this point forward,” he said. (BlueRoomStream.com)

She asked her peers on the House floor Nov. 14 if they would want to take advice and instruction from individuals who have never worked in that profession.

The House overrode the governor’s veto in an 85-27 vote. All 27 votes against the override came from Republican members of the House.