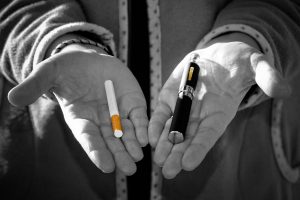 The U.S. Food and Drug administration reported more than three million middle school and high school students were users of e-cigarettes in 2015. (Photo by 123rf.com)

At a time when cigarette use among teens is at an all-time low, savvy social media marketing efforts and fancy flavors such as cotton candy and mint have made e-cigarettes the most commonly used tobacco product among youth for the second consecutive year.

Raising concern among tobacco prevention specialists are studies like the one conducted by the Journal of the American Medical Association which found that 81 percent of tobacco using teens first used a flavored tobacco product.

“Just when we were making in-roads into reducing tobacco use, suddenly there is a new concern and a new challenge,” Gilda Ross, an advisor for the DuPage Reality Illinois which is a teen-led anti-tobacco movement that operates under the DuPage County Health Department.

Similar Reality Illinois chapters exist across the state and have been instrumental in reducing smoking in public places such as parks.

Health agencies are seeing teens that began using e-cigarettes turn to other tobacco products like cigarettes, she added.

According to figures from the U.S. Food and Drug administration in 2015, more than three million middle school and high school students were users of e-cigarettes — an increase from 2.46 million in 2014.

In 2015, the FDA determined that 16 percent of high school age and 5.3 percent of middle school students had used some form of vaporizers, vape pens, hookah pens, electronic cigarettes, and/or e-pipes.

Glenbard West High School senior Bailey Wallace, who is a member of the DuPage Reality Illinois, said that many high school students have a lack of understanding of e-cigarettes and the negative consequences of using them and as a result more students are turning to them.

If kids smoke, many try e-cigarettes as a way to cut back on cigarettes, when in reality e-cigarettes can have just as many negative consequences, she added. 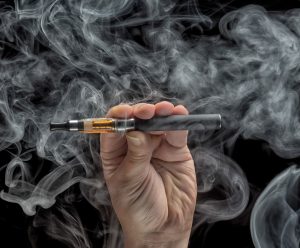 Despite health concerns, vaping is gaining popularity among young adults, according to state and national health officials. (Photo by 123rf.com)

A misperception exists at the high school level that more of teen’s peers use any type of tobacco product than really do, according to Karen Jarczyk, prevention director for 360 Youth Services the social services group, said.

“This can really heighten risk,” she added.

“The majority of students make healthy choices,” Jarczyk said. “We want kids to realize the culture around them is healthier than they realize.”

360 Youth Services serves as the lead agency for the Power of Choice, a substance abuse prevention program focused on growing the number of youth who make healthy choices about alcohol, tobacco, and other drugs for Naperville School District 203 and Indian Prairie School District 204.

“We work with sixth- to eighth- graders to help them build resiliency and their own sense of strength,” she said, “so the students learn they don’t need to rely on outside things to feel okay about themselves.”

“One of the most challenging pieces for young people is to keep themselves clean and free, uninhibited about using substances of any kind or taking anything into their bodies which is not healthy for them,” Jarczyk added.

She said nicotine is a highly addictive substance and can serving as a stepping stone to using more traditional tobacco products.

This year, the Federal Drug Administration released finalized regulations of all tobacco products including any type of Electronic Nicotine Delivery Systems (ENDS).

The scope of the regulations includes the manufacture, import, packaging, labeling, advertising, promotion, sale, and distribution of ENDS.

Among the regulations by 2018, all product packages and advertisements of newly-regulated covered tobacco products must include a warning statement regarding the use of nicotine.

“Local communities have been waiting for these policies which will trickle down to communities and individuals in terms of prevention strategies,” she said.

Jarczyk said, policies and regulations in terms of marketing, sales, and age restrictions are the best thing that can help with prevention.

Discuss with your teen the health consequences of e-cigarettes. They are not safe to use.

Be aware that it is possible to use electronic devices to smoke marijuana in oil form and that it is odorless, smokeless, and very difficult to detect.

If you use e-cigarettes to quit smoking, consider using another method and be sure to keep devices out of children’s access.

— Teens turning away from tobacco but toward e-cigarettes  —