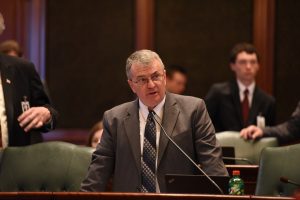 Illinois House Republicans are pushing legislation that would limit state legislative leaders to a decade in power.

If passed, the law would take effect with the inauguration of the next General Assembly, beginning in 2019.

The legislation is currently in the state House’s Rules Committee.

State Reps. David Olsen (R-Downers Grove) and Thomas Morrison (R-Palatine) have signed on as chief co-sponsors of the bill. State Rep. David Reis (R-St. Marie) has signed on as a co-sponsor.

The bill is similar to a measure Bennett introduced last year that failed to get a hearing before the state House Executive Committee.

Olsen said that being a chief co-sponsor was an easy call for him.

“The people of Illinois are clamoring for term limits, so I am pleased to be a leading sponsor of this new bill,” Olsen said,

Current House Speaker Michael Madigan is the longest-serving leader of any state or federal legislative body in the history of the United States, having served as speaker of the Illinois House for all but two years since 1983.

“We are experiencing a concentration of power in Illinois that is currently going unchecked,” Olsen said. “Term limits for legislative leaders would allow for a healthy turnover of leadership and ideas.”

Morrison said he also was happy to join on as a chief co-sponsor of the legislation to limit legislative power.

“I believe this bill would be a good way to restore some accountability to Springfield and prevent any one individual from accumulating too much power within state government,” Representative Morrison said.

“Leading any public body is a privilege that should never become a lifetime career,” Morrison said upon the legislation’s passage. “Democracy has always worked best when everyone has a voice in confronting the challenges facing its citizens.”

Under Senate Resolution 3, the Senate president and Senate minority leader are limited to five two-year leadership terms in office.

Senator Morrison could not be reached as of press time to see if she would support Bennett’s measure in the Senate.