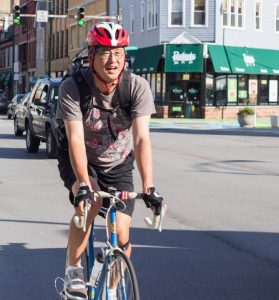 Legal definitions are more than just words in a heavy, musty law text.

A single word can affect the lives of thousands of people.

A traffic tragedy had just such an impact.

On May 18, 2015, Dennis Jurs, a 68-year old Vietnam veteran, was riding his bike near Hampshire, Ill. He was struck and killed by a motor vehicle. The motorist was issued a ticket for failing to yield the right-of-way.

But in court a judge threw out the ticket, citing case law that a bicycle was not a vehicle and that therefore right-of-way laws did not apply in this case.

The Jurs family and bicycle safety advocates, including the Active Transportation Alliance, launched a campaign to have the law changed.

State Rep. Anna Moeller (D-Elgin) sponsored legislation amending the Illinois Vehicle Code to include bicycles in the definition of what is considered a vehicle.

Her bill, House Bill 5912, provides that bicycles and bicyclists “shall be granted all of the rights” of drivers of trucks and cars.

Thus, motorists now must provide the right-of-way to cyclists exactly as they would to other motorists.

The safety of bike riders in traffic was emphasized further by an increase in cyclist fatalities. So far in 2016, four bike riders have been killed in Chicago alone in collisions with motor vehicles.

Urging greater safety awareness, Jim Merrell, advocacy director of the Active Transportation Alliance, said, “Everyone who’s out there using the roadway has a responsibility to be respectful and follow the rules of the road. We all have a role to play in street safety. We need tobe putting our sights on reckless behavior, dangerous behavior,targeting the most dangerous streets and intersections.

“Everyone wants to get home safe, whether they’re walking, biking or driving a car.”

— Out of tragedy a new state law to protect cyclists —