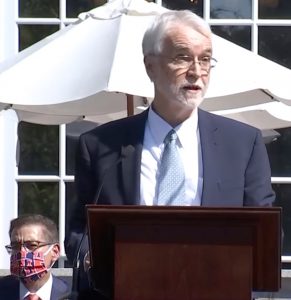 University of Illinois System President Tim Killeen speaks during the ceremony Monday. Aug. 23 regarding the $140 million campus investment at the Urbana-Champaign campus. (illinois.gov)

Gov. J.B. Pritzker on Monday, Aug. 23 joined University of Illinois officials in announcing plans for the construction of a new, world-class facility as well as large-scale renovations and updates to two centrally located buildings on the Urbana-Champaign campus.

Made possible by the Rebuild Illinois capital plan, the University of Illinois Urbana-Champaign (UIUC) will receive $140 million in state funds, matched by $52 million in non-state funding for a total investment of $192 million.

The project will take place in four phases and includes the complete restoration of the existing iconic Altgeld Hall and the replacement of Illini Hall with a new facility in its location for the Departments of Mathematics and Statistics.

It will create a significant amount of space, and the new Illini Hall will become home to a data science center as part of the Champaign-Urbana Hub of the Illinois Innovation Network. Construction on the first phase began last month and full project completion is expected in June 2026. The work will be overseen by the Illinois Capital Development Board (CDB).

“The Rebuild Illinois plan recognizes the importance of the University of Illinois system as a foundation for innovation and a core building block for our state’s workforce of the future,”said Pritzker. “What’s happening with these investments in higher education is a microcosm of what we’re doing across the state. We’re fixing decades-old problems, creating and supporting good jobs, vaulting our state into the future, and invigorating opportunities for the next generation — including the thousands of young people who call U of I home.”

“The funding, made possible by the foresight of Gov. Pritzker and supported by other elected leaders, will provide a key, new home for the kind of cutting-edge data science that will power scientific advancement and economic improvement, and make certain that Altgeld Hall remains a vital part of the heart of the Urbana-Champaign campus, as well.”

Including the Rebuild Illinois funding being provided for the Altgeld and Illini Hall projects, the capital plan will invest a total of $686.3 million into the University of Illinois system over the upcoming years. $586.3 million in funding will go towards new construction, large-scale renovations, and deferred maintenance to repair infrastructure that was neglected during previous administrations.

“The data science field is fast-growing, and the Altgeld-Illini Hall projects will be incubators for collaborative research and education in data science, as well as other mathematical sciences for generations to come,” said Urbana Chancellor Robert Jones.

The Rebuild Illinois capital plan passed with bipartisan super-majorities and will invest $45 billion in roads, bridges, railways, universities, early childhood centers, and state facilities over a six-year plan and is intended to also revitalize local economies across the state.

“The U of I is a powerful economic driver for Champaign County and these types of investments make not only the university stronger, but the entire county.  These projects will create both academic opportunities as well as good paying jobs that are needed for these important capital investments,” said Champaign County Board Chair Kyle Patterson.